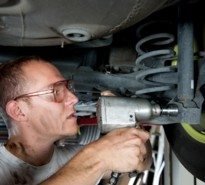 When the health risks of asbestos exposure began to gain national attention in the mid 1970’s because of asbestos related diseases like mesothelioma, many industries and government agencies took steps to warn and protect industrial workers. In many cases, asbestos was removed from the work environment or workers were trained in the use of protective gear. But the auto industry appears to be an exception.

Not only is asbestos still used in brake linings and clutch facings because of its heat resistant properties, but mechanics who replace or repair these brakes may be coming in contact with asbestos on a regular basis. When mechanics remove worn brakes to clean the brake drum, asbestos dust can come from the debris of the deteriorating pads. Asbestos dust is also created during the grinding and beveling of new brakes or clutch gaskets during installation.

Both situations create a potentially hazardous environment. When asbestos is turned into dust, tiny fibers of the mineral can be inhaled, lodging deep in the lungs. Over time, the irritation caused by these needle-like fibers can lead to a variety of lung problems, including the rare but deadly cancer, mesothelioma.

The jury is still out as to whether auto mechanics face a statistically higher risk, as a group, of contracting mesothelioma, but there is no doubt about their exposure.

In 1986, the EPA issued official guidelines on the prevention of asbestos disease among auto mechanics, listing mesothelioma as a consequence of exposure to asbestos fibers from brakes and clutches. But a four-month investigation conducted by the Seattle Post-Intelligencer newspaper subsequently found ‘alarmingly high’ levels of asbestos contamination in gas stations and brake repair shops.

The study collected samples of dust from floors, work areas and tool bins in shops in Washington, D.C., as well as six states. Government certified labs were used for the testing. According to the report, exposure levels were so high in some shops that public health officials warned more than one in 10 unprotected mechanics would likely develop cancer. Cancers like mesothelioma are generally considered incurable with orthodox therapies.

Compounding the risk for auto mechanics, is the fact that they are often performing brake repair or replacement in a tight space where the dust is likely to be concentrated and many wear no protective equipment. Although many new brakes are still being made with asbestos, the quantities have been reduced. However, many clutch facings and gaskets are still being manufactured with asbestos.

Researchers in Iran tested the safety of a new version of the drug pemetrexed in patients with non-small cell lung cancer and malignant pleural mesothelioma. This drug is used to treat these patients when they are not able to get surgery for their cancer. The researchers were able to determine that pemetrexed is safe in patients with non-squamous non-small cell lung cancer. Treatment Choices Malignant pleural mesothelioma is a lung-related cancer like non-small cell lung cancer. It is caused by exposure to asbestos. Treatment for mesothelioma usually involves chemotherapy, radiation therapy, and surgery. Patients may receive more than one type of treatment. This is called multimodal therapy. Pemetrexed is a chemotherapy drug that interrupts the cell replication process that helps … END_OF_DOCUMENT_TOKEN_TO_BE_REPLACED