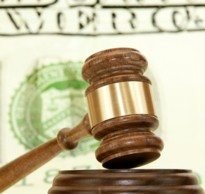 A jury in California has awarded what may be the largest punitive damages award in state history to a woman who says she got mesothelioma cancer from washing her husband’s asbestos-laden work clothes.  Rhoda Evans and her husband Bobby were awarded $8.8 million in compensatory damages and $200 in punitive damages after the Los Angeles jury decided that the manufacturer of the asbestos pipes Bobby Evans worked with knew how dangerous they were but failed to put warning labels on them.

Bobby Evans worked for the L.A. Department of Water and Power from 1974 and 1998.  As part of his job, he had to cut asbestos cement water pipes manufactured by CertainTeed Corporation.  Cutting the pipes created asbestos dust, which Evans then carrier home on his clothing, and which was inhaled by his wife when she did his laundry.  Exposure to this asbestos dust later caused her to have mesothelioma.  Inhalation of airborne asbestos fibers has been shown to cause not only mesothelioma, but also other types of lung cancer and asbestosis.

The dangers of asbestos have been well-documented for more than 50 years.  Thousands of workers in industries ranging from shipbuilding to power plants, oil refineries, manufacturing and construction have contracted mesothelioma as a direct result of on-the-job asbestos exposure.  Both the workers themselves and their wives have been found to have a high risk of mesothelioma due to their contact with asbestos contaminated clothing.  In most cases, symptoms don’t develop until many years after exposure.

The jury in the Evans found that CertainTeed was aware of the cancer-causing properties of its asbestos pipes as early as the 1960’s, but continued to manufacture them and did not even put warning labels on them until 1985.  The L.A. Department of Water and Power was also held partially responsible for the compensatory portion of the award for its failure to adequately protect Bobby Evans on the job.

As quoted by Legal Newsline, “The award is unlikely to stand under California law, though I couldn’t say if it’s the trial court or appellate court that will reverse,” said Ted Frank a fellow at the Manhattan Institute Center for Legal Policy.  Los Angeles County Superior Court Judge Conrad Richard Aragon has postponed entering the judgment and has asked that plaintiff and defense counsel submit briefs on what an appropriate punitive damages award should be in this case

Punitive damages are damages intended to punish the defendant and others from engaging in conduct similar to that which formed the basis of the lawsuit.  Lawyers for CertainTeed call the award ‘excessive.’  They maintain that the punitive award will not have its intended impact since the company hasn’t sold asbestos products for nearly 20 years and all of the executives who may have been at fault have since left the company.

However, even if the punitive award is reduced substantially it still sends a strong message to other manufacturers of asbestos containing products that it may be more appropriate to settle its mesothelioma cases than risk a 9 figure verdict at trial.

Researchers in Italy say a virus normally found in goats could offer a new, safer way to kill malignant mesothelioma cells and improve patient outcomes.  The virus is caprine herpesvirus 1 (CpHV-1). It has been blamed for bouts of spontaneous abortions in goat herds. But it does not appear to cause any disease in humans. In fact, previous studies show CpHV-1 can kill several types of human cancer cells.  The newest study of CpHV-1 was conducted at the National Cancer Institute IRCCS G. Pascale Foundation in Naples. Scientists there made two important discoveries. They found that not only can CpHV-1 kill mesothelioma cells without harming normal cells, but it might also have the potential to make chemotherapy work better.  Mesothelioma … END_OF_DOCUMENT_TOKEN_TO_BE_REPLACED