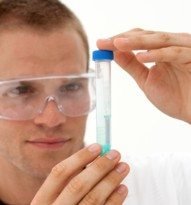 Mesothelioma, a type of cancer caused by exposure to asbestos, can be extremely difficult to diagnose.  Not only do the symptoms, which can include shortness of breath, weight loss and fatigue, mimic many other, less serious conditions, but some patients have no symptoms at all until the disease is in its advanced stages.

For this reason, many physicians now combine traditional cancer diagnostic techniques such as biopsy, X-ray, CT and PET scans with advanced blood and tissue tests designed to detect signs of the disease and help direct treatment.  The Mesomark assay blood test, developed by Fujirebio Diagnostics, Inc. and released in Europe in 2005 is one such test.  Mesomark tests for the presence and amount of Soluble Mesothelin-Related Peptides (SMRP) in the blood.  Mesothelioma cells release SMRP, which is known as a ‘biomarker’ into the blood stream.

The Mesomark test was approved by the Food and Drug Administration for humanitarian use in the U.S. in January 2007.  Not only can the test be used to help with the initial mesothelioma diagnosis, which is often a case of ruling out other diseases, but it can also help doctors determine the progression of the cancer and decide whether or not a given therapy is working.  If the SMRP level is rising, it is an indication that the number of malignant mesothelioma cells is growing.  However, if the level remains constant or even drops, it can signal a positive response to therapy.

In a study comparing the Mesomark assay blood test for mesothelin with two other types of biomarkers for cancer, megakaryocyte potentiating factor (MPF) and osteopontin, researchers found that mesothelin was by far the most sensitive for mesothelioma.  While the other two biomarkers both detected the presence of cancer, neither was able to distinguish it as mesothelioma.

More recently, a tissue test known as MiRview meso and developed by Rosetta Genomics, is showing promise as an accurate way to differentiate malignant pleural mesothelioma from other types of cancers in the lungs or lung pleura.  MiRview meso is a highly-sensitive molecular diagnostic tool that measures tiny amounts of a material called micro-RNA in a tissue sample. Studies have shown the test to be 94% accurate in pinpointing malignant pleural mesothelioma, the most common type of mesothelioma.

A history of asbestos exposure may be the most important clue to diagnosing mesothelioma and often helps doctors decide which patients should have these high-tech tests.  It is estimated that between 1940 and 1979, approximately 27.5 million workers were exposed to asbestos in the U.S.  Because it can take 30 to 50 years for symptoms to develop, many of these workers are just now being diagnosed.  As with most cancers, the earlier mesothelioma can be detected, the earlier treatment can begin and the better the prognosis.

A new study published in Thoracic Cancer discussed the impact of COVID‐19 pandemic on new mesothelioma diagnoses in Italy. Malignant mesothelioma is a rare disease of great interest to the scientific community and to public health. This is due to its high lethality and its association with asbestos exposure. The timely diagnosis of mesothelioma is important. Although it may not change the prognosis of the disease, it can help in treatment strategies. It can also help in documenting previous exposure to asbestos. This can contribute to any request for compensation. New Study Shows Promising Results During the COVID-19 pandemic, there was a delay in the diagnosis of oncological diseases. This was because many departments were converted into COVID wards. And … END_OF_DOCUMENT_TOKEN_TO_BE_REPLACED