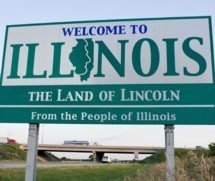 Despite the fact that it has no naturally occurring sources of the cancer-causing mineral asbestos, the state of Illinois has a 30 percent higher rate of mesothelioma than the national average.  Every year 1.3 out of every 100,000 Illinois residents contract the rare cancer, which is caused almost exclusively by exposure to asbestos.  The National Cancer Institute puts the total number of cancer deaths in Illinois between 1979 and 2001 at 1,697. According to the Environmental Working Group, Cook County, Illinois is one of the top reporting counties for asbestos and mesothelioma deaths in the country.

The state of Illinois is also the site of one-sixth of the asbestos and mesothelioma legal battles in the U.S.  Every year in the U.S., 2,000 to 3,000 people die of mesothelioma..  When those cases go to court, many end up being heard in Madison County, Illinois.  In fact, 480 court dates have been set for asbestos cases in 2011, up from 424 in 2010.

Illinois has been an important industrial center for the U.S. for decades.  Not surprisingly, much of the asbestos  illness in the state is related to industries that thrived there because of its location on the Great Lakes.  Because iron ore could be easily brought in from Minnesota and Michigan, Illinois became the site of steel mills.  As the population of Chicago grew, power plants sprang up to support it and other thriving Illinois communities.  Eventually, oil refineries were also established in Illinois. These three industries are among the most high-risk for asbestos exposure.  In all, more than sixty Illinois businesses – including soft drink giant Pepsi-Cola – have been named in asbestos-related lawsuits.

Asbestos has also proven to be a dangerous problem at the state’s Great Lakes Naval Base.  According to the National Cancer Institute, Navy veterans suffer from mesothelioma at a much higher rate than the general public, due in large part to the heavy use of asbestos as an insulator throughout ships.  Hundreds of thousands of sailors breathed the toxic fibers unknowingly when they worked or lived below decks for months at a time on Navy vessels.  Thousands more workers were exposed to asbestos dust while doing repair work on damaged ships in the shipyard at the Great Lakes Naval Base.

Reports of asbestos-related cancer deaths in Illinois continue to climb, largely because damage from asbestos fibers can occur decades after the exposure.  Mesothelioma is the most lethal of the asbestos-related diseases, which can include other types of lung cancer or asbestosis.  Mesothelioma cancer occurs in the protective lining around organs, especially around the lungs and the abdominal cavity.