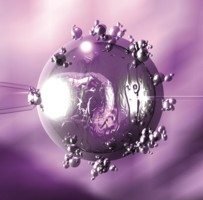 New National Cancer Institute-funded research at the University of Hawaii may help pave the way for finding and stopping the growth of mesothelioma tumor cells. Mesothelioma is caused by exposure to asbestos fibers. The new study, published in the current issue of the Proceedings of the National Academy of Sciences, shows how tiny shards of asbestos kill some cells and turn others into malignant cancer cells.

In collaboration with researchers at New York University, the University of Chicago, the University of Pittsburgh, San Raffaele University of Milano and the Imperial College in London, the U of H team found that cells killed by asbestos fibers through a process called necrosis release a molecule called high-mobility group box 1 protein (HMGB1). This protein appears to trigger an inflammatory reaction in the surrounding healthy cells which promotes the growth of tumors. People who have mesothelioma have higher levels of HMGB1 in their blood serum which may make it possible to identify the disease early, when treatments are most effective.

Mesothelioma is a fast-growing cancer that typically starts in the mesothelial lining around the lungs and other organs. As cancer cells spread out of control, the lining thickens and becomes stiffer, eventually restricting the ability of the lungs to expand. The new study suggests that stopping the inflammation caused by the release of HMGB1 may be one way to stop, or at least slow down, the progress of mesothelioma.

The next step for the researchers involves testing that hypothesis. Lead study authors Drs. Haining Yang and Michele Carbone plan to conduct clinical trials in a remote Turkish village where more than half of the residents die of mesothelioma. In the US, more than 20 million people have been exposed to asbestos, usually in industrial workplaces, and 2,000 to 3,000 people are diagnosed with mesothelioma every year.

Researchers in Iran tested the safety of a new version of the drug pemetrexed in patients with non-small cell lung cancer and malignant pleural mesothelioma. This drug is used to treat these patients when they are not able to get surgery for their cancer. The researchers were able to determine that pemetrexed is safe in patients with non-squamous non-small cell lung cancer. Treatment Choices Malignant pleural mesothelioma is a lung-related cancer like non-small cell lung cancer. It is caused by exposure to asbestos. Treatment for mesothelioma usually involves chemotherapy, radiation therapy, and surgery. Patients may receive more than one type of treatment. This is called multimodal therapy. Pemetrexed is a chemotherapy drug that interrupts the cell replication process that helps … END_OF_DOCUMENT_TOKEN_TO_BE_REPLACED