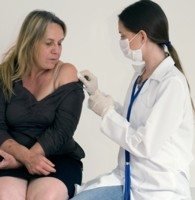 Vaccines work by teaching the body’s immune system to recognize and destroy the germs that cause disease. That same principle is now being applied to vaccines against mesothelioma and other cancers. Vaccines and other immune-based therapies (immunotherapies) could be one of the new strategies to treat mesothelioma. This therapeutic approach may enhance the effectiveness of current treatments (including chemotherapy and radiation) while reducing side effects, according to a report published in the February/March issue of Cell Adhesion & Migration.

Doctors have long realized that the immune system plays an important role in fighting cancer. Tumor associated proteins called tumor antigens are expressed on the surface of cancer cells. These are signals that could trigger the immune system to launch a response that destroys cancer cells. Yet this response doesn’t always work effectively because the cancer cells are able to inhibit the immune response. That inhibition is one of the mechanisms that allow many cancers to develop and sometimes they can spread when detected too late. This is why millions of people are diagnosed with cancer each year including mesothelioma.

“By a selective process, the tumor cells that aren’t destroyed can enter a state of equilibrium with the immune system, in which the growth of the tumor is checked by immune cells, killing a proportion, but not all of the cancer cells,” explains Marc Grégoire, PhD, author of the report and head researcher in the Institut de Recherche Thérapeutique in France. “In this stage, tumors can persist for years without developing into full-blown cancer, which is probably the case for mesothelioma. However, tumor cells may continue to accumulate mutations, potentially generating variants that resist, avoid, or suppress the antitumor immune response.”

Two types of immunotherapies can be used to treat mesothelioma. In passive immunotherapy, components of the immune system, such as cytokines, antibodies, or T lymphocytes are produced in a laboratory, which are then injected into the patient to attack the cancer cells. In studies conducted so far, passive immunotherapy hasn’t shown much effectiveness, producing only a weak immune response against the cancer. Some of these strategies have been abandoned because they are not targeted enough against the cancer cells.

Active immunotherapy stimulates the body’s own immune system to fight cancer. An example of active immunotherapy is the cancer vaccine, which uses antigens from mesothelioma cells to “teach” the immune system to recognize and attack mesothelioma. The challenge has been in finding a specific mesothelioma antigen to use in the vaccine, although mesothelin is one possibility being explored. Another area of interest is in using viruses, such as the attenuated measles virus used in the measles vaccine, that replicate specifically in cancer cells.

The idea of using immunotherapy for cancer treatment has been around for about 15 years. One of the reasons why clinical trials haven’t shown much effectiveness is that immunotherapy for mesothelioma doesn’t work well on its own, says Dr. Grégoire. “It must come rather like an ‘auxiliary’ strategy, to finish cancer treatment,” he says. “It must thus be used after a ‘conventional’ strategy, like surgery, when that is possible, or chemotherapy or radiotherapy [radiation].”

Chemotherapy and radiation may prime tumor cells for immunotherapy death by stressing them out. Stressed-out cancer cells release signals – “danger signals” – that could stimulate an immune response. A recent study by researchers in the Netherlands provided evidence of this combination effect, finding that immunotherapy using dendritic cells effectively triggered an immune response when it was given after chemotherapy.

Any of the immunotherapy techniques currently under investigation could be highly effective against mesothelioma once researchers refine and learn how to better control them, says Dr. Grégoire. “The most important thing is to target the cancer cells to obtain the most efficient response without adverse effects for the patient,” he says.

The MESOMICS project is the most comprehensive dataset of mesothelioma genomics to date. The data in this resource can help researchers to design precision treatments for mesothelioma patients This project was created by an international collaboration between scientists from France, Chile, and the United States. Understanding Diagnosis Malignant pleural mesothelioma is a rare cancer caused by asbestos exposure. There are approximately 2,000 cases of mesothelioma diagnosed in the United States alone every year. Because it is so rare, the treatment options are very limited compared to other types of cancer. The limited treatment options combined with the cancer’s ability to spread without being noticed makes mesothelioma a deadly disease. Median overall survival for mesothelioma patients is a little over a … END_OF_DOCUMENT_TOKEN_TO_BE_REPLACED