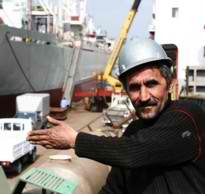 The Occupational Safety and Health Administration (OSHA) is launching an effort to keep more shipbreaking workers safe from the dangers of asbestos and other potential job hazards. Shipbreakers, workers involved in dismantling decommissioned ships, are at high risk formesothelioma and other diseases because of exposure to cancer-causing asbestos fibers.  Asbestos was used for many years as an insulator in all kinds of seagoing vessels.

Shipbreaking, also called ship scrapping or ship disposal, includes breaking down the ship’s structure, as well as removing and disposing of the equipment on board. OSHA has announced a new national emphasis on shipbreaking safety that will include more frequent federal inspections of shipyards where dismantling is taking place.  The initiative also includes an extensive online document detailing the health risks of asbestos to workers and including hyperlinks to the regulations employers are required to follow in order to keep their safe.

Exposure to airborne asbestos fibers has been conclusively linked to a host of medical problems, most notably lung cancer, lung irritation and scarring (called asbestosis), and an aggressive form of cancer in the lining around lungs or other organs called mesothelioma.  Thousands of shipbuilders and repair workers, many of them veterans, were exposed for years to asbestos making it one of the highest risk industries for mesothelioma. Thousands have since died of mesothelioma.  Between 1982 and 2000, 632 cases of mesothelioma – about seven times the national average – were diagnosed in the Hampton Roads, Virginia area, a hot spot for shipbuilding activities.  And medical surveys of shipyard workers conducted at Norfolk Naval Shipyard in Virginia and released in 1984, found that 79 percent of those workers had lung abnormalities possibly related to asbestos exposure.

A rock-like mineral, asbestos is able to withstand high heat and is fire resistant, making it an ideal insulator in places – such as the engine rooms of ships – where high heat is often generated.  But asbestos use wasn’t limited to boiler rooms.  It can also be found in sleeping quarters, mess halls and navigation rooms.  While the Environmental Protection Agency says asbestos is not a health threat when left alone and intact, asbestos becomes a serious hazard when it deteriorates or is disturbed, as it is during ship dismantling.  When inhaled or ingested the fibers may lead to mesothelioma decades after exposure.

For this reason, OSHA guidelines for safe shipbreaking in the presence of asbestos include wearing special negative-pressure respirators and limiting the time workers can spend in an asbestos-laden environment.  OSHA also requires employers to institute a medical surveillance program for all workers who work in an environment at or above the permissible exposure limit (PEL) for asbestos for 30 or more days per year.  All workers who engage in this type of work should be offered medical examinations or consultations both before and after their 30 days of exposure.

The MESOMICS project is the most comprehensive dataset of mesothelioma genomics to date. The data in this resource can help researchers to design precision treatments for mesothelioma patients This project was created by an international collaboration between scientists from France, Chile, and the United States. Understanding Diagnosis Malignant pleural mesothelioma is a rare cancer caused by asbestos exposure. There are approximately 2,000 cases of mesothelioma diagnosed in the United States alone every year. Because it is so rare, the treatment options are very limited compared to other types of cancer. The limited treatment options combined with the cancer’s ability to spread without being noticed makes mesothelioma a deadly disease. Median overall survival for mesothelioma patients is a little over a … END_OF_DOCUMENT_TOKEN_TO_BE_REPLACED