Home / News / Plumbers at Risk for Mesothelioma from Asbestos 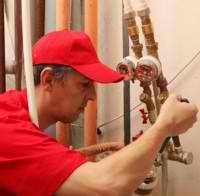 The same insulation that is protecting water pipes in hundreds of thousands of homes and commercial buildings, poses a serious health threat to the plumbers called on to repair or replace those pipes.

Insulation containing the mineral asbestos, which causes the cancer mesothelioma, was a popular choice for use around pipes because of its resistance to temperature extremes and corrosion.  Although it has not been used in new construction since the early 1980’s the material can also still be found in pipe fittings, pipe coatings and water heater filaments.

In addition, an estimated 35 million homes also contain a vermiculite insulation product called Zonolite.  While vermiculite, which is clay-based, is believed to be safe, the material in Zonolite was collected from a source where asbestos was also mined.  As a result, small amounts of the fibers have been found in Zonolite, posing a potential risk to anyone who disturbs it.

Plumbers (who primarily deal with residential pipes) and their commercial counterparts called pipe fitters, are often exposed to these asbestos-containing materials in the course of their daily work.  Because the repair or replacement of pipes often requires them – and the insulation around them – to be bent or cut, plumbers can disturb asbestos fibers in the insulation, causing them to become airborne.  For years before plumbing professionals became aware of the dangers of exposure to asbestos, many worked around this airborne asbestos daily, often in cramped spaces, with no adequate protective gear.  These tiny airborne fibers of the mineral can lodge in the body and lead to mesothelioma, asbestosis, and other cancers.

There are two main kinds of mesothelioma – pleural mesothelioma which is formed in the pleural lining that covers the lungs, and peritoneal mesothelioma that forms in the tissue covering the abdomen.

Writing in the Journal of the American Medical Association, a team of CDC researchers calls the number of deaths among plumbers and pipe fitters ‘proportionately significant’ and predict that the number of mesothelioma deaths will not return to pre-asbestos rates until approximately 2055.  Because of the prevalence of asbestos-containing materials in older homes and buildings, they estimate that 1.3 million construction and general industry workers are still potentially being exposed to the mineral.

A Canadian study found that tracking trends in mesothelioma at the local level can help officials predict future mesothelioma cases. Most mesothelioma tracking efforts focus on the national scale and monitor cases across a country or region. This study, published in Cancer Causes and Control, looked at mesothelioma cases based on industrial sources of asbestos in Ontario and British Columbia. Growing Number of Cases Asbestos is a toxic material that is used in many commercial and industrial products. It’s durability and heat resistance made it very popular in products like construction materials, textiles, and vehicles. Mesothelioma is a deadly cancer caused by exposure to asbestos. It was first identified as a cancer-causing material in 1977 by the International Agency for … END_OF_DOCUMENT_TOKEN_TO_BE_REPLACED