Home / News / Vermiculite Insulation May Be Contaminated with Asbestos 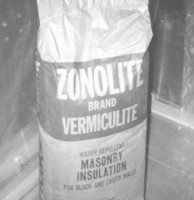 Most of the light, crumbly mica-like mineral vermiculite, found in the insulation of millions of homes, contains small amounts of the more dangerous mineral asbestos which has been linked to mesothelioma.

Vermiculite is a harmless clay-based mineral with shiny flakes that expand when heated.  The expanded material is light-weight and fire resistant and was a popular insulator in homes, particularly between the 1920’s and the 1980’s.  It is usually found between the joists in attic floors and inside exterior walls.  While pure vermiculite is safe, vermiculite mined near Libby, Montana for more than 70 years may not be.

More than 70 percent of all vermiculite sold in the U.S. before 1990, and marketed under the brand name Zonolite, was produced from the mine in Libby.  But the same mine also contained a deposit of asbestos, a mineral linked to serious health problems like mesothelioma, asbestosis, and some other cancers. Because of this, the Environmental Protection Agency (EPA) warns consumers to assume that their vermiculite insulation is contaminated with some amount of asbestos and to take steps to protect themselves.

Asbestos contains tiny sharp fibers which, when inhaled, can lodge in the lungs and cause physiological changes that can lead to cancers like mesothelioma.  There is no safe level of asbestos exposure, however asbestos that is enclosed behind a wall or above a ceiling – such as the asbestos that might be found in vermiculite insulation – is not likely to pose a threat unless disturbed.

It’s when insulation needs to be removed, during renovation, repair or demolition, that asbestos can become a problem.  Although the percentage of asbestos in bulk vermiculite is probably not high, there is some risk any time the fibers are disturbed.  Consumers with vermiculite insulation should not disturb or handle the material themselves and should hire an asbestos professional  if removal is necessary.  The EPA also recommends the following additional precautions:

• If you must go in the attic, walk on the boards to minimize disturbance

While it is possible for a licensed abatement expert to entirely remove asbestos insulation from a home, it is not an inexpensive process.  Depending on the size of the house and the amount of insulation, abatement can cost as much as $10,000.

Asbestos-related illnesses like mesothelioma typically don’t occur without repeated exposure.  Even in those cases, symptoms – which can include breathing difficulty and coughing – usually do not occur until decades after the exposure.

The MESOMICS project is the most comprehensive dataset of mesothelioma genomics to date. The data in this resource can help researchers to design precision treatments for mesothelioma patients This project was created by an international collaboration between scientists from France, Chile, and the United States. Understanding Diagnosis Malignant pleural mesothelioma is a rare cancer caused by asbestos exposure. There are approximately 2,000 cases of mesothelioma diagnosed in the United States alone every year. Because it is so rare, the treatment options are very limited compared to other types of cancer. The limited treatment options combined with the cancer’s ability to spread without being noticed makes mesothelioma a deadly disease. Median overall survival for mesothelioma patients is a little over a … END_OF_DOCUMENT_TOKEN_TO_BE_REPLACED