This chart shows the rate of mesothelioma in the U.S., independent of the increasing population.  It appears to have peaked in the mid 1990’s and is now slowly declining.  This is probably due to the fact that there are fewer asbestos products sold in the U.S. 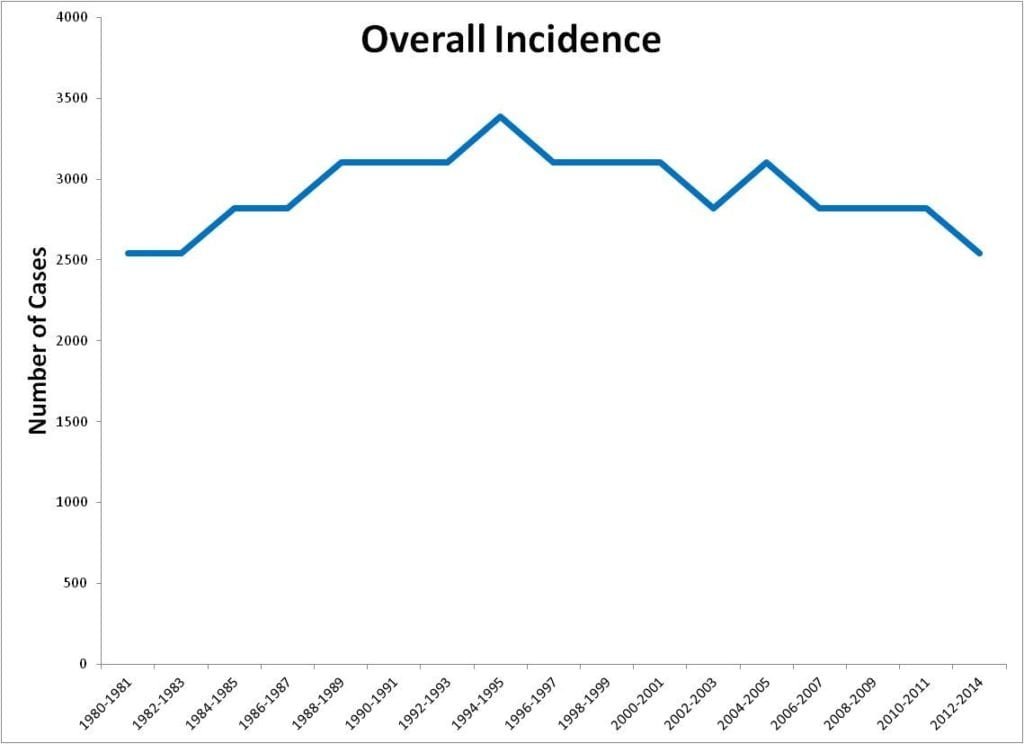 This chart shows the rate of mesothelioma in the U.S. by age for Whites, African-Americans, and Hispanics.  The lines track together, but the rates are highest for Whites. 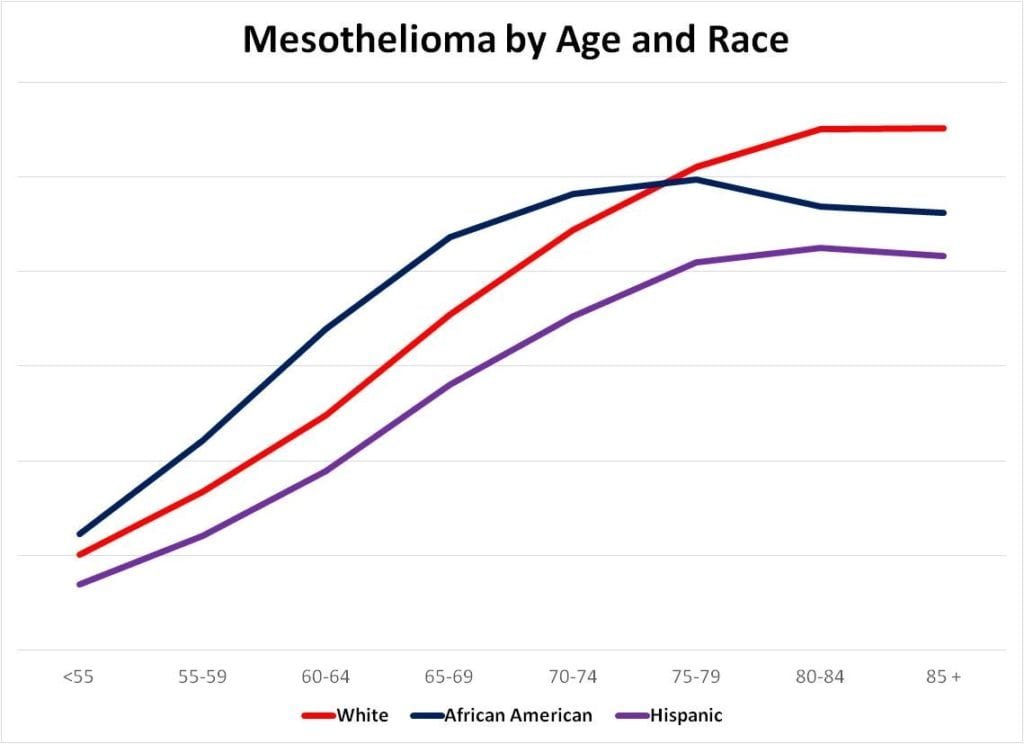 This chart compares the incidence rates of mesothelioma in the U.S. for men and women from 1975-2014.  It’s clear that the rate for women is about one-quarter the rate for men.  This is probably due to the fact that men have greater exposure to asbestos.  In addition, we see that the peak was in the mid 1990’s but that there is a bigger decrease for men than for women.  This difference has not been explained. 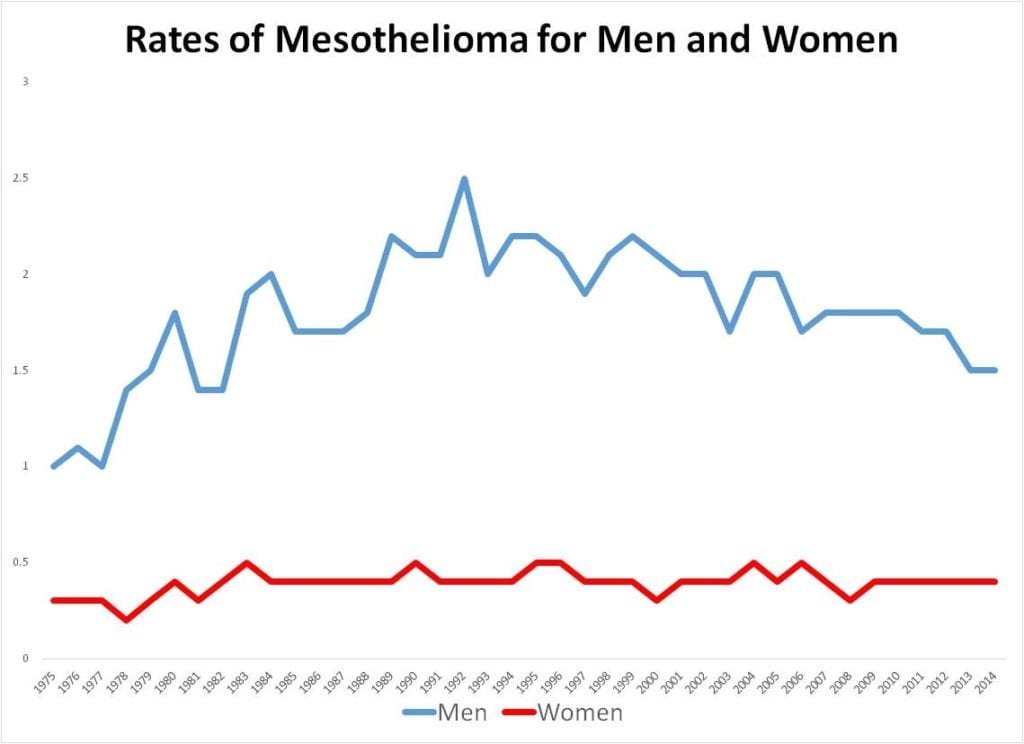 This chart shows the 5-year relative survival rates from 1975 to 2010.  Survival rates were flat and even decreasing up to 2000.  After that year, survival has steadily increased.  This is due, in part, to the introduction of HIPEC for peritoneal mesothelioma and more effective surgeries for pleural mesothelioma. 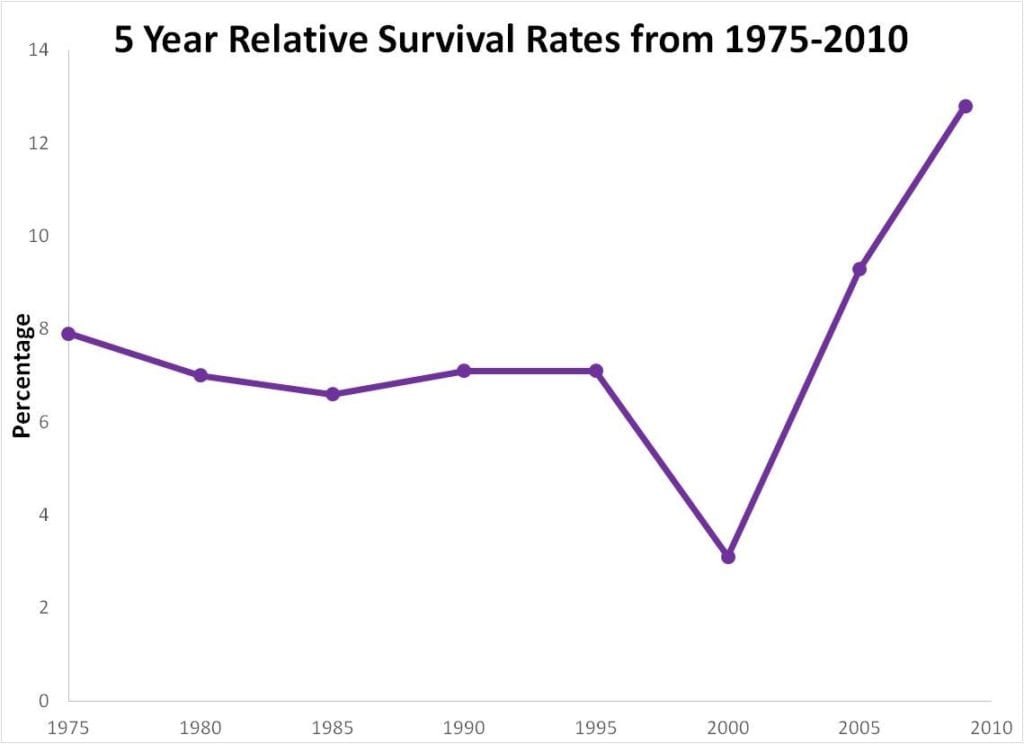 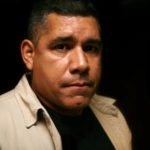 Mesothelioma Clinical Trials: Are Minorities Underrepresented? - The results of a new study from Harvard and Dana Farber Cancer Institute raise the question of whether ethnic minorities are being fairly represented in mesothelioma clinical trials. The study focused on four of the most common types of cancer in the US: breast, prostate, lung, and colorectal cancer.  It looked at demographic data for close to 6,000 people enrolled in precision oncology trials for these cancers. Researchers found that clinical trials tend to favor white and Asian patients over Hispanic and black patients.  The study could have implications for mesothelioma clinical trials of new, tailored treatments.  Precision Oncology and Mesothelioma Clinical Trials Malignant mesothelioma is a challenging cancer to treat. Mesothelioma cells are good at protecting themselves from damaging … END_OF_DOCUMENT_TOKEN_TO_BE_REPLACED 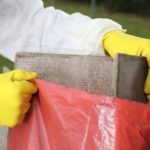 Asbestos Bans Not a Quick Fix for Rising Mesothelioma Incidence - A new study is further evidence that asbestos bans are not a quick fix for the global problem of malignant mesothelioma incidence.  Researchers in China and the US just released a worldwide research study on the asbestos cancer. The study included 21 regions in 195 countries and territories and spanned 27 years.  The authors say mesothelioma incidence does decrease after asbestos bans. But the decrease can take decades. In the meantime, they say many countries need to do a better job of tracking and managing mesothelioma cases.  Asbestos and Mesothelioma Incidence Malignant mesothelioma is an aggressive cancer with a poor prognosis. Exposure to asbestos is its only known cause. People with mesothelioma often die of this cancer in less than … END_OF_DOCUMENT_TOKEN_TO_BE_REPLACED 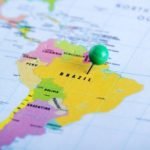 One in Three Mesothelioma Deaths Go Unreported in Brazil - Brazil has a history of underreporting mesothelioma deaths and the trend is not improving.  That is the word from Brazilian public health experts. Their new report appears in a recent issue of Occupational Medicine.  Researchers from the Institute of Collective Health in Salvador examined electronic medical records from across the country. They compared them with the official record of asbestos related diseases (ARDs) in Brazil’s Mortality Information System.  They discovered that more than 300 mesothelioma deaths were missing from the roughly 1000 deaths reported between 2008 and 2014. The researchers say such underreporting makes it harder to evaluate “remedial policies” that could help prevent asbestos-linked illnesses. Asbestos in Brazil Asbestos is the primary cause of mesothelioma deaths worldwide. Mesothelioma is a … END_OF_DOCUMENT_TOKEN_TO_BE_REPLACED 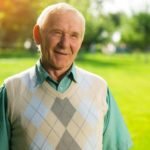 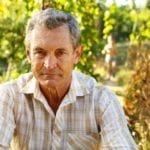 Annual Report on Cancer Death Rates: Good and Bad News for Mesothelioma Patients - The latest report on cancer death rates in the US is both good and bad news for people with malignant mesothelioma.  The good news is that the rate of death from all types of cancer has declined in recent years. This is true for both men and women of all races. Better drugs and improved screening tools are some of the reasons.  The bad news for people with mesothelioma is that the likelihood of dying from it is not declining as rapidly as overall cancer death rates. Asbestos cancer continues to confound cancer researchers around the world.  Mesothelioma: A Rare Cancer with High Mortality Malignant mesothelioma is one of the rarest cancers in the US. That is fortunate because the … END_OF_DOCUMENT_TOKEN_TO_BE_REPLACED 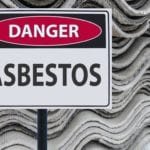 South Korean Mesothelioma Rates Still Rising Decades After Asbestos Ban - A new report out of South Korea is proof that it can take many years for mesothelioma rates to decline even after implementing an asbestos ban. Asbestos is the number one cause of malignant mesothelioma worldwide. South Korea banned asbestos in 2009. But a report in the International Journal of Environmental Research and Public Health shows the country will likely be dealing with the after-effects well into the future.  A national asbestos ban is a vital step toward fighting occupational cancer. But the new study is a sobering reminder that it cannot eliminate mesothelioma overnight.  Occupational Risk for Malignant Mesothelioma Mesothelioma can be a health hazard for anyone who ever worked with or around asbestos.  Once a worker inhales or … END_OF_DOCUMENT_TOKEN_TO_BE_REPLACED 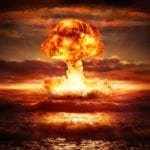 Atomic Military Veterans Faced Higher Risk From Asbestos Than Radiation - A study published in a US medical journal shows atomic military veterans faced a higher risk from asbestos exposure during their service than they did from radiation.  The study published last summer focused on more than 100,000 veterans. These veterans participated in at least one of 230 above-ground nuclear weapons tests between 1945 and 1962. The tests took place at eight nuclear test sites.  Some soldiers participated in military maneuvers, observed nuclear weapons tests, or provided technical support. Others served on board ships or were stationed on islands during or after nuclear tests.  In spite of their proximity to radioactive weapons, atomic military veterans were more likely to die of an asbestos-related illness like mesothelioma than a radiation-related illness. The … END_OF_DOCUMENT_TOKEN_TO_BE_REPLACED 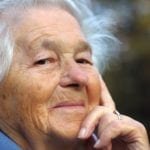 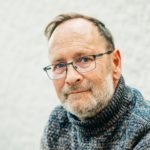 Treatment Advances Fail to Improve Mesothelioma Survival Trends - A new report shows mesothelioma survival trends have remained steady for decades, despite new drugs, new surgery techniques, and the introduction of pleural catheters.  The report comes from cancer researchers at Ottawa Hospital Cancer Centre in Canada. Canada has one of the world’s highest rates of malignant pleural mesothelioma. This is likely related to the country’s long history of asbestos production. To compile the new report, researchers compared mesothelioma outcomes in three different decades between 1991 and 2019. There were surprisingly few differences in mesothelioma survival trends in the three decades.  Mesothelioma’s Destructive History Pleural mesothelioma is a virulent cancer of the pleural membrane. This is the tissue or mesothelium that surrounds the lungs. It is thin but flexible and … END_OF_DOCUMENT_TOKEN_TO_BE_REPLACED 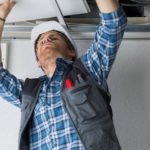 Canadian Study Highlights Occupational Mesothelioma Risk - A new study of more than 2 million Canadian workers is shining a spotlight on the occupational mesothelioma risk from asbestos exposure in several industries. The study included data on 2.18 million workers in the Occupational Disease Surveillance System (ODSS). These workers were employed from 1983 to 2014. The researchers followed the workers for years to see how many of them developed mesothelioma or a chronic lung disease called asbestosis.  They compiled the data on which industries had the most diagnoses. The results paint a sobering picture of the occupational mesothelioma risk to thousands of industrial workers. Asbestos and the Link to Mesothelioma Asbestos is a fibrous mineral that occurs naturally in the soil in many parts of the world. … END_OF_DOCUMENT_TOKEN_TO_BE_REPLACED

Researchers in Italy say a virus normally found in goats could offer a new, safer way to kill malignant mesothelioma cells and improve patient outcomes.  The virus is caprine herpesvirus 1 (CpHV-1). It has been blamed for bouts of spontaneous abortions in goat herds. But it does not appear to cause any disease in humans. In fact, previous studies show CpHV-1 can kill several types of human cancer cells.  The newest study of CpHV-1 was conducted at the National Cancer Institute IRCCS G. Pascale Foundation in Naples. Scientists there made two important discoveries. They found that not only can CpHV-1 kill mesothelioma cells without harming normal cells, but it might also have the potential to make chemotherapy work better.  Mesothelioma … END_OF_DOCUMENT_TOKEN_TO_BE_REPLACED