Asbestos is a naturally occurring mineral that has been found throughout the world. It was once called the “magic mineral” because of its seemingly magical properties. These properties include: it is almost impossible to set it on fire (incombustible), it is nearly impossible to corrode (anti-corrosive), and it is actually composed of fibers so that it can be woven into other materials. It is also relatively inexpensive because it can be taken out of the ground and does not have to be synthesized in a factory.

All these properties pale in comparison to the fact that asbestos is toxic and cancer causing for human beings. Asbestos causes mesothelioma and other asbestos related diseases.

Asbestos Use by Egyptians, Greeks and Romans

Asbestos has been used since ancient times. Between 2000-3000 BC, embalmed bodies of Egyptian pharaohs were wrapped in asbestos cloth to protect the body from deterioration. In Finland, clay pots dating back to 2500 BC contained asbestos fibers, which are believed to strengthen the pots and make them resistant to fire.
Romans were said to have woven asbestos fibers into a cloth-like material that was then sewn into tablecloths and napkins. These cloths were purportedly cleaned by throwing them into a blistering fire, from which they came out miraculously unharmed and essentially whiter than when they went in.

While Greeks and Romans exploited the unique properties of asbestos, they also documented its harmful effects on those who mined the silken material from ancient stone quarries. Greek geographer Strabo noted a “sickness of the lungs” in slaves who wove asbestos into cloth. Roman historian, naturalist and philosopher, Pliny the Elder, wrote of the “disease of slaves,” and actually described the use of thin membrane from the bladder of a goat or lamb used by the slave miners as an early respirator in an attempt to protect them from inhaling the harmful asbestos fibers as they labored.

From Peter the Great to the Industrial Revolution 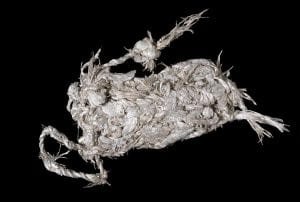 Over the ages chrysotile (a fibrous variety of the mineral rock that is composed primarily of hydrated magnesium silicate) is the principal source of asbestos. It was mined and used for a variety of purposes. During the reign of Peter the Great, Russia’s tsar from 1682-1725, a purse made of fireproof asbestos was obtained by Benjamin Franklin and is now part of London’s Natural History Museum. During the industrial revolution the use of asbestos blossomed. It started to be used to insulate factories, schools, homes, and ships, and later to make automobile brake and clutch parts, roofing shingles, ceiling and floor tiles, textiles, and cement.

Today, cancer claims at least one life every hour among people who have inhaled asbestos on the job. As many as 200,000 wives and children of asbestos workers will also grow ill merely from washing asbestos laden clothes or being exposed in their homes.

There are different kinds of asbestos. The most common forms are: 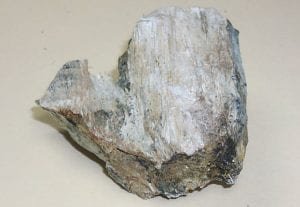 “White” asbestos or Chrysotile which is obtained from serpentine rocks. Chrysotile is the type most often used in industry. It is more flexible than other types of asbestos and can be spun and woven into fabric. This is the kind of asbestos used in theatre curtains and firefighters’ suits.

“Brown” asbestos or Amosite is a trade name for the amphiboles belonging to the Cummingtonite – Grunerite solid solution series, commonly from Africa.

“Blue” asbestos or Riebeckite is also known under the name of Crocidolite. Blue asbestos is commonly thought of as the most dangerous type of asbestos.

Where is Asbestos Found?

Asbestos was used in thousands of industrial, commercial, construction, automotive and consumer products. The list of asbestos containing products is very long.

In the United States, chrysotile has been the most commonly used type of asbestos. Chrysotile asbestos was often present in a wide variety of materials, including but not limited to:

Does Asbestos Cause Mesothelioma?

Asbestos has been classified as a known human carcinogen (a substance that causes cancer) by the U.S. Department of Health and Human Services, the EPA, and the International Agency for Research on Cancer. A leading cause of mesothelioma is asbestos exposure.

How Long After Exposure to Asbestos Do Mesothelioma Symptoms Occur?

Generally, those who develop asbestos-related diseases show no signs of illness for a long time after their first exposure. It can take from 10 to 40 years or more for symptoms of an asbestos-related condition to appear.

How Much Asbestos Exposure is Dangerous?

Although it is clear that health risks from asbestos exposure increase with heavier exposure and longer exposure time, investigators have found asbestos-related diseases in individuals with only brief exposures.

In 1989 the EPA passed the Asbestos Ban and Phase Out Rule which was subsequently overturned in the case of Corrosion Proof Fittings v. U.S. Environmental Protection Agency, 1991. This ruling leaves many consumer products that can still legally contain trace amounts of asbestos.

Get Your Free Book: “Surviving Mesothelioma and Other Cancers: A Patient’s Guide”

If you have more questions about asbestos, read about the journey of the longest-living mesothelioma survivor, Paul Kraus, in our free book. Request your copy today! 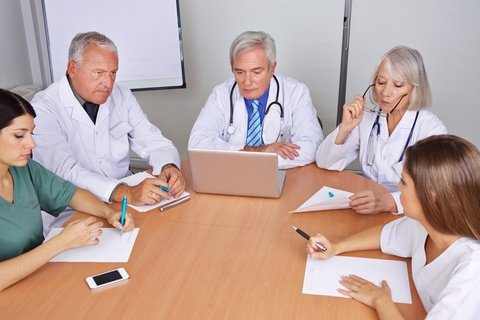 Mesothelioma treatment may be best managed by a multidisciplinary team of doctors and specialized surgeons. Mesothelioma is a rare cancer that is caused by exposure to asbestos. Asbestos can be found in thousands of industrial and consumer products. People who are exposed to asbestos may not experience symptoms of mesothelioma for decades. Multimodal therapy may give patients the best odds of surviving mesothelioma. Multimodal therapy often includes surgery, chemotherapy, and radiation. Yet even when combined, these therapies achieve only limited success. The 5-year survival rate of patients with mesothelioma is less than 20%. The National Comprehensive Cancer Network recommends that patients with mesothelioma be treated by a multidisciplinary team of doctors. A multidisciplinary team includes doctors from different specialties. They … END_OF_DOCUMENT_TOKEN_TO_BE_REPLACED