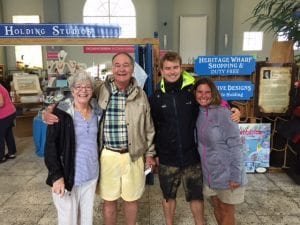 Jim Hutchison with his wife, Pepper, his grandson and daughter.

A Maine man diagnosed with pleural mesothelioma three years ago says a newly-approved immunotherapy drug and his own unwillingness to accept the grim prognosis he was given are helping to keep him alive.

James “Jim” McHutchison of York, Maine, was diagnosed with pleural mesothelioma on Good Friday in 2013, despite the fact that he had never worked in an asbestos industry. The devastating news came just a few weeks after doctors had removed several liters of fluid from his chest and told him there was no evidence of cancer.

“My family doctor called me just after 5 o’clock and 15 minutes later my wife, Pepper, and I were in his office,” recalls McHutchison. “He said, ‘You have an incurable cancer called mesothelioma. We don’t know what to do for it and you have six months to a year to live.’”

McHutchison was outraged and vowed to find a medical professional willing to offer him some hope. Although malignant mesothelioma is highly resistant to conventional cancer treatment, the McHutchisons were determined to seek out other options and, if necessary, experimental therapies.

The Quest for Hope

“I was being told by doctors that they either couldn’t do anything for me or they they could give me a couple of extra months, at best,” says McHutchison, who was a robust 72-year-old at the time of his diagnosis.

Fearing that EPP surgery, an extensive operation that removes the affected lung, the pleura, the diaphragm and other at-risk tissues, would leave him a “surgical cripple”, he turned it down and instead went on “a quest to find someone who could do something.”

In the first six months after Jim’s diagnosis, that quest took the McHutchisons to no fewer than 50 different mesothelioma doctors from Maine to Maryland including specialists at Brigham & Women’s Hospital, Dana Farber Cancer Institute, Massachusetts General Hospital, and even the NIH.

They finally found a glimmer of hope in a thoracic surgeon in Portland, Maine who advised them against radical surgery.

Searching for a Mesothelioma Drug

The McHutchisons were referred to a Kennebunk, Maine oncologist whom they were told would also listen and be open to mesothelioma treatment alternatives.

“He said all he could offer us was chemotherapy but I said ‘All that does is make the patient sick…perhaps so sick that it’ll make me wish I was dead,’” says McHutchison.

But six months later when the McHutchison’s heard about Keytruda (pembrolizumab), an immunotherapy drug approved by the FDA in 2015, they got excited. Keytruda gained national attention as a potential mesothelioma treatment after 76 percent of mesothelioma clinical trial participants showed a response to it. In about a quarter of those patients, Keytruda actually shrunk their mesothelioma tumors.

With help from Surviving Mesothelioma’s clinical consultant, Abby Palmer, MSW, his doctor’s office, and Merck, the makers of Keytruda, Jim was able to get the drug and has been using it to treat his pleural mesothelioma for a year with amazing results.

“The news just keeps getting better and better with each CT,” Jim says. “Everything has diminished on Keytruda. The bone metastasis has calcified. My thyroid gland showed signs of shrinking to the point where doctors no longer recommended I have it operated on.”

Advice for Other Mesothelioma Patients

Though Jim’s battle with mesothelioma is far from over, he has already defied the odds and most doctors’ predictions. The McHutchisons believe they would never have come this far if they had not refused to give up and instead continued to advocate for Jim’s mesothelioma care.

Asked what advice he would offer to other patients fighting to survive pleural mesothelioma, Jim quotes Winston Churchill.

“I keep a quote from him on my fridge that says ‘Never, never, never give up,’” Jim says. “I think that is the first thing people need to remember. The doctors say I have this disease and there is not much that they can do for me, but they don’t know me.”

Keytruda and tenacity aren’t the only things supporting Jim’s mesothelioma survival. Find out what else he is doing, including nutritional therapy, to beat the odds when this special Surviving Mesothelioma series continues. 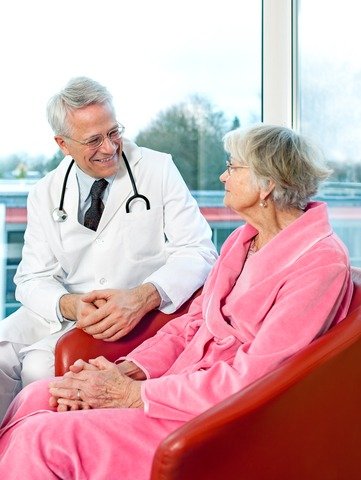 In rare instances, people can have two different types of cancer at the same time. It is especially rare to have pleural mesothelioma and breast cancer. One woman in Portugal was found to have this exact diagnosis. According to the authors who shared her case, she is the first published case of mesothelioma and breast cancer at the same time. A Mesothelioma Diagnosis Malignant mesothelioma is a rare form of cancer. It is caused by exposure to asbestos. This type of cancer forms on the lining of internal organs like the lungs. There are three categories of mesothelioma: epithelial, sarcomatoid, and biphasic. When mesothelioma forms on the lining of the lungs, it is called malignant pleural mesothelioma. It is the … END_OF_DOCUMENT_TOKEN_TO_BE_REPLACED