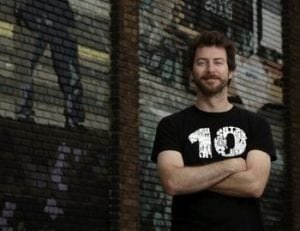 I was officially diagnosed with malignant pleural mesothelioma in June 2012. This was after a VATS procedure to determine why I had a pleural effusion around my left lung. (VATS is a video-assisted thoracoscopic surgery procedure, a minimally invasive surgical approach used to diagnose and treat chest problems.) The pleural effusion was found accidentally during a chest x-ray in February 2012 for what my primary care physician thought was flu or pneumonia. I had two thoracentesis procedures but the effusion kept returning, so the VATS procedure was determined to be the next step.

My diagnosis and treatment was handled exclusively by the Cleveland Clinic. My surgeries were led by my thoracic surgeon, Dr. David Mason (now at Baylor’s Mesothelioma Treatment Center). Once I began treatment, Dr. Marc Shapiro and Dr. Greg Videtic handled the chemotherapy and radiation oncology, respectively. They remain my treating physicians to this day.

Dr. Mason suggested the Extrapleural Pneumonectomy (EPP) immediately, as he felt that with my age at the time (38) and my good health I could not only handle the procedure but be able to bounce back from it better than most patients who are older and less healthy. The overall treatment regimen consisted of three rounds of Cisplatin and Alimta, then the EPP surgery (including removal of the right lung, right pleura, right half of my diaphragm, and pericardium), and then 27 radiation sessions. All treatment was done at the Cleveland Clinic between June and November 2012.

Short Term Side Effects of Treatments

I suffered few side effects from the chemotherapy, aside from some tiredness and some soreness at the infusion sites. I did develop a pulmonary embolism in my good right lung while still in chemotherapy, which resulted in me being placed on blood thinners for a few months. The cause of the embolism is still unclear, although the likely source would be the cancer.

The EPP was a rough and tumble 9-hour surgery, but I was able to bounce back rather quickly afterward. I spent 10 days in the hospital, including two in ICU. I was walking within one day and eating normally within three days. It is amazing how much easier it is to breathe with one good lung instead of one good and one bum lung. Aside from soreness and an 18” incision wrapping around my back, the primary discomfort was from the missing rib in my back – which was removed to get the organs out. A nerve block was used for five days in hospital, but the transition to oral meds was easy.

Radiation itself was straightforward. I did develop some side effects – dehydration being one that plagued me for the entirety of the treatment and even afterward. But the sites of the radiation were carefully chosen and there was no actual pain associated with the treatment, minus the discomfort of having to rest prone on the table despite just having my lung out.

The pain medication – which included opiates – proved to be somewhat troublesome, only because I had some fuzziness and some memory issues when on them. Nothing dramatic, but I chose to wean myself off them seven months after my EPP.

Long Term Side Effects of Treatments

The most obvious long-term side effect for me has been the slight curvature of my spine to the right, a result of the missing rib and my body’s desire to re-align. This has led to some re-adjustment on my part when it comes to travel, playing drums, sitting in cars, sleeping, etc. Some strain on my left side is apparent as well. I do stretching and try to maintain proper posture at all times to stay comfortable for long durations.

One of the most dangerous side effects of the EPP is the development of an infection within the space where the lung once was, known as an empyema. I was warned that this could happen in very rare instances, usually within a short time after the surgery. In my case, I defied the odds and developed the infection almost exactly a year later. When I ended up with a fever of nearly 103 degrees one day, it was determined I had a strep infection in my chest cavity – likely the result of flossing my teeth too aggressively.

Between October and November 2013, I spent nearly a month in the hospital having surgeries (four surgeries in five days) to clean and disinfect the chest cavity, along with daily IV antibiotic treatments. It was terrifying but by no means a typical situation for EPP patients. As my oncologist likes to remind me, “John, you’re weird.” Chest infection from flossing? Yeah, that’s pretty weird. I survived, though, and learned all about what it is like to live in a hospital for a few weeks.

One other common side effect of thoracic surgery is Horner’s Syndrome, essentially damage to the sympathetic nerve in one side of your chest. It results in some odd long term side effects. I was diagnosed with Horner’s a few days after my EPP. My symptoms are rather mild but permanent: dilated right pupil (no effect on vision), occasional tingling on my right side, and the inability to sweat on the right side of my body, from head to toe. Yes, I am bisected when it comes to perspiration. This final side effect has no real negative effects, but it’s a great ice breaker at parties.

Lastly, I do have some memory and concentration problems that appear to be a result of the chemotherapy treatment. Patients call this “chemobrain.” I cannot say for certain that these mild memory issues are a direct result of the treatment or perhaps just a result of a kind of PTSD caused by the cancer diagnosis and treatment regimen’s effects. That said, I’ll take forgetting birthdays over being dead any day.

How I am Doing Today

I am now 43 years old and four years out from diagnosis and treatment. I have shown no evidence of disease since the time of my treatment. This continues to astound my doctors, who spend most of my appointments discussing what we’ve all been up to. I continue to be a husband, father, professor, and band member, continuing nearly all of my activities I participated in before my diagnosis and treatment. Stairs can be troublesome for me – I take them slowly – and walking and talking can be an issue – I don’t walk and talk while trying to teach.

I have some muscle loss on my right side, so I cannot hold my arm over my head for long periods (like when screwing in light bulbs, for instance). But overall I feel strong enough to do the things I enjoy. I play with my daughter, travel, play drums, and teach. I live each day with a realization that my cancer is likely to return and I am living on what amounts to borrowed time, i.e., I don’t consider myself “cured” nor do I label myself a “survivor.” I am just someone who was diagnosed with an incurable cancer, who received an aggressive palliative treatment regimen, and who has lived longer than the average for mesothelioma patients while still maintaining a good quality of life.

I was exposed to asbestos via my father’s work clothing. He worked in a factory that manufactured brakes and clutches, and he brought home asbestos on his clothing each day, exposing me, my sister, and my mother. My exposure began the year I was born and continued for more than a decade. As for my trial, verdict, and subsequent judgment, I was awarded $27.5 million by the jury. The judgment was just a judgment, though, and I am not privy to discuss the specifics of anything that has occurred since the trial ended in December 2013.

(Mr. Panza found his attorneys through Surviving Mesothelioma. If you would like similar help, just click here.)

An international group of researchers have provided recommendations for countries to create a mesothelioma registry. Mesothelioma registries are great tools to monitor the negative effects of asbestos. It can help to identify clusters of asbestos exposure. Registries can also track the impact of asbestos reduction programs. Asbestos Health Risks Asbestos is a naturally occurring mineral that has been found throughout the world. Even though it is toxic, it is used in manufacturing and construction in many countries around the world. Mesothelioma is a cancer that is caused by exposure to asbestos. It grows in the lining of organs like the lungs. Generally, those who develop mesothelioma show no signs of illness for a long time after their first exposure. It … END_OF_DOCUMENT_TOKEN_TO_BE_REPLACED