Mesothelioma is a rare form of cancer in which malignant (cancerous) cells are found in the mesothelium, a protective sac that covers most of the body’s internal organs.

What is the mesothelium?

The mesothelium is a membrane that covers and protects most of the internal organs of the body. It is composed of two layers of cells: One layer immediately surrounds the organ; the other forms a sac around it. The mesothelium produces a lubricating fluid that is released between these layers, allowing moving organs (such as the beating heart and the expanding and contracting lungs) to glide easily against adjacent structures.

The mesothelium has different names, depending on its location in the body. The peritoneum is the mesothelial tissue that covers most of the organs in the abdominal cavity. The pleura is the membrane that surrounds the lungs and lines the wall of the chest cavity. The pericardium covers and protects the heart.

How common is mesothelioma?

Over 2,000 new cases of mesothelioma are diagnosed in the United States each year. Mesothelioma occurs more often in men than in women and risk increases with age, but this disease can appear in either men or women at any age. See statistics for more details.

What are the risk factors for mesothelioma?

Working with asbestos is the major risk factor for mesothelioma. A history of asbestos exposure at work is reported in the majority of cases. However, mesothelioma has been reported in some individuals without any known exposure to asbestos. Click here to learn more about asbestos.

Who is at increased risk for developing mesothelioma?

Since the early 1940s, millions of American workers have been exposed to asbestos dust. An increased risk of developing mesothelioma was originally found among shipyard workers, people who work in asbestos mines and mills, producers of asbestos products, workers in the heating and construction industries, and other trades people. Today, the U.S. Occupational Safety and Health Administration (OSHA) sets limits for acceptable levels of asbestos exposure in the workplace. People who work with asbestos wear personal protective equipment to lower their risk of exposure.

There is evidence that family members and others living with asbestos workers have an increased risk of developing mesothelioma, and possibly other asbestos-related diseases. This risk may be the result of exposure to asbestos dust brought home on the clothing and hair of asbestos workers.

What are the symptoms of mesothelioma?

How is mesothelioma diagnosed?

Diagnosing mesothelioma is often difficult, because the symptoms are similar to those of a number of other conditions. Diagnosis begins with a review of the patient’s medical history, including any history of asbestos exposure. A complete physical examination may be performed, including x-rays of the chest or abdomen and lung function tests. A CT (or CAT) scan or an MRI may also be useful.

A biopsy confirms a diagnosis of mesothelioma. In a biopsy, a surgeon or a medical oncologist removes a sample of tissue for examination under a microscope by a pathologist. (See Pathology Diagnosis to learn why some patients request a second opinion.)

Mesothelioma is described as localized if the cancer is found only on the membrane surface where it originated. It is classified as advanced if it has spread beyond the original membrane surface to other parts of the body, such as the lymph nodes, lungs, chest wall, or abdominal organs. 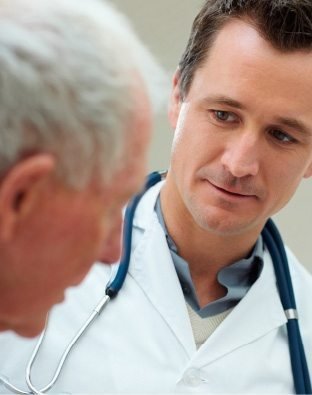 What is the conventional approach to treating mesothelioma?

Treatment for mesothelioma depends on the location of the cancer, the stage of the disease, and the patient’s age and general health. Standard treatment options include surgery, radiation therapy, and chemotherapy. Sometimes, these treatments are combined. Standard treatment for all but localized mesothelioma is generally not curative. 1 (See survival rates for median survival rates with different treatments.)

Surgery – Extrapleural pneumonectomy in selected patients with early stage disease may improve recurrence-free survival, but its impact on overall survival is unknown. Pleurectomy and decortication can provide palliative relief from symptomatic effusions, discomfort caused by tumor burden, and pain caused by invasive tumor. Operative mortality from pleurectomy/decortication is <2%, while mortality from extrapleural pneumonectomy has ranged from 6% to 30%. 2

Radiation/Chemotherapy – The use of radiation therapy in pleural mesothelioma has been shown to alleviate pain in the majority of patients treated; however, the duration of symptom control is short-lived. Single-agent and combination chemotherapy have been evaluated in single and combined modality studies. The most studied agent is doxorubicin, which has produced partial responses in approximately 15% to 20% of patients studied. Some combination chemotherapy regimens have been reported to have higher response rates in small phase II trials; however, the toxic effects reported are also higher, and there is no evidence that combination regimens result in longer survival or longer control of symptoms. 3

Alimta – The only FDA approved chemotherapy for malignant pleural mesothelioma (in combination with cisplatin) is pemetrexed (Alimta). In the key clinical trial that led to its approval, Alimta was combined with another chemotherapy drug (cisplatin) and compared with cisplatin alone. The patients who received the two drugs (Alimta and cisplatin) had their cancers progress (grow/spread) in 5.7 months (median). The patients who only received cisplatin had their tumors progress in 3.9 months (median). The median survival for the patients who received both drugs was 12.1 months versus 9.3 months for cisplatin only. 4

For some physicians, these therapeutic gains are not impressive. For example, some have written, “For the treatment of mesothelioma, there is little evidence that current therapies (chemotherapy, radiation, surgery) provide significant benefit for survival or quality of life.[R]adical treatments, occupying the 3 months after diagnosis, can take up the best 3 months that the patient might have had.Malignant mesothelioma has largely defeated treatment…”5

Unless otherwise indicated by an endnote, the above material was adapted from National Cancer Institute Cancer Facts – Mesothelioma: Questions and Answers 5/13/2002.

An international group of researchers have provided recommendations for countries to create a mesothelioma registry. Mesothelioma registries are great tools to monitor the negative effects of asbestos. It can help to identify clusters of asbestos exposure. Registries can also track the impact of asbestos reduction programs. Asbestos Health Risks Asbestos is a naturally occurring mineral that has been found throughout the world. Even though it is toxic, it is used in manufacturing and construction in many countries around the world. Mesothelioma is a cancer that is caused by exposure to asbestos. It grows in the lining of organs like the lungs. Generally, those who develop mesothelioma show no signs of illness for a long time after their first exposure. It … END_OF_DOCUMENT_TOKEN_TO_BE_REPLACED