Asbestos is a naturally occurring mineral and it was put into thousands of different products. This means that people who manufactured or worked around certain products had a higher than normal amount of asbestos exposure. As would be expected, these people also have a higher than normal rate of mesothelioma occurrence. Although asbestos has been phased out of many of the products these workers used, there are still many people with these occupational backgrounds that are being diagnosed with mesothelioma every day.

What Jobs Exposed People to Asbestos?

There are many high risk occupations and exposed people to asbestos and potentially mesothelioma.  Jobs with a high risk of asbestos exposure include:

Thousands of construction products contained asbestos up until the late 1970’s and early 1980’s. Demolition crews and do-it-yourself-home renovators are among the most at risk of exposure.  People who work in the construction trades need to be aware of this.

Electricians, especially those who worked before the 1980’s or even those who repair older structures today can be exposed to various asbestos containing products. These products include: asbestos panels, asbestos-cement, electrical shielding, asbestos electrical paper, asbestos wire insulation, and asbestos cable wrap.

When a building, home or other structure is on fire, asbestos products may become damaged and release their deadly asbestos fibers into the air. For example, many firefighters were exposed to asbestos during the 9/11 attacks in New York City. In addition, in the past, asbestos was used to make protective firefighting uniforms including helmets and boots.

Mechanics, especially those who worked around cars potentially had exposure to asbestos in brakes, clutches and transmissions. Late model cars with original parts may still contain this dangerous equipment.

Plumbers, pipe fitters, and others in the plumbing trades are at risk from asbestos exposure due to asbestos lined pipes. In addition, asbestos insulation was used around boilers, tanks, ducts, and other plumbing systems.

Power houses or power plants contain a lot of equipment that gets hot. In the past, asbestos products were often used to insulate against these hot surfaces. For example, heat-resistant fireproofing spray and pipe insulation were often used in power plants. Even today, workers at power plants must be careful when they cut or drill into old asbestos pipes.

Realtors (real estate agents) and home inspectors are also at risk for asbestos exposure if they spent time in older homes and buildings that are in poor states of repair.  Floors, ceilings, roofs and walls all contained asbestos products in the past.

People who worked in refineries are also at heightened risk for asbestos exposure and possibly mesothelioma. Asbestos was used in insulation, heavy machinery, machine parts, and even in the protection clothing that workers used in oil refineries.

No one wants a fire on a ship at sea so asbestos insulation was used throughout ships in the 20th century to protect against fire. Boilers, pipes, and other surfaces that could get hot were often covered or treated with asbestos products. At one time almost a third of all mesothelioma lawsuits were brought by people who had worked aboard ships while at sea or during dry dock repairs.

Sadly, teachers can also be at risk for asbestos exposure. Schools, especially those built in the 1940’s -1960’s often had asbestos in various construction products such as ceiling tiles, floors, insulation, and even in the walls (in the joint compound). If teachers work in schools that are in poor state of repair then they could be exposed to airborne asbestos fibers.

Veterans in all branches of the service may have been exposed to asbestos especially if they were in the service before the late 1970’s. Navy ships, jeeps, and aircraft all contained asbestos during that time.

Many Occupations Exposed People to Asbestos

There are many occupations that could have exposed workers to asbestos and to potentially greater risk of mesothelioma.  Some of these occupations include: 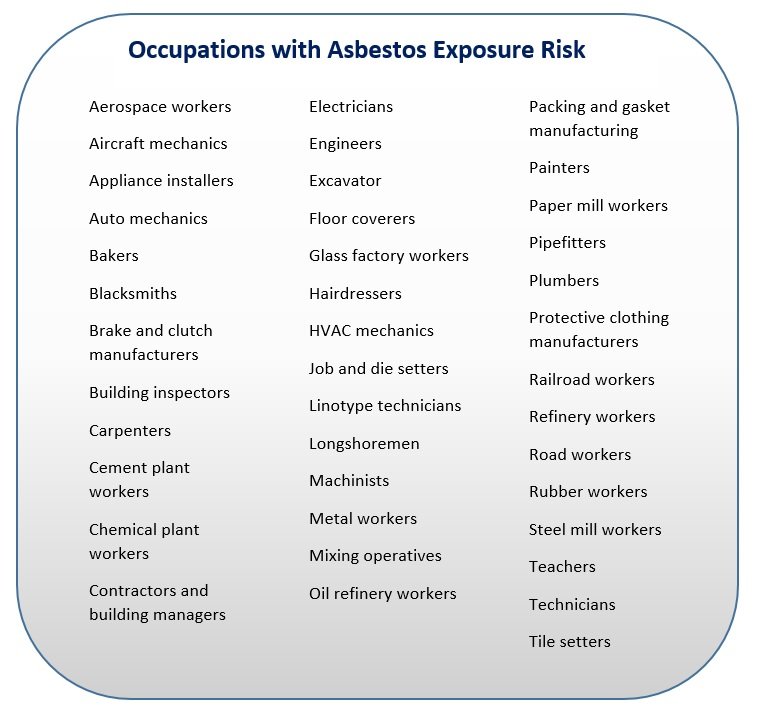 The Occupational Safety and Health Administration (OSHA) started regulating worker’s asbestos exposure in 1971. Although amounts of permissible asbestos are regulated in the U.S. for some products, there is still no comprehensive asbestos ban in the United States. In addition, asbestos still can be found in homes, buildings, schools, factories, ships, and cars.

An international group of researchers have provided recommendations for countries to create a mesothelioma registry. Mesothelioma registries are great tools to monitor the negative effects of asbestos. It can help to identify clusters of asbestos exposure. Registries can also track the impact of asbestos reduction programs. Asbestos Health Risks Asbestos is a naturally occurring mineral that has been found throughout the world. Even though it is toxic, it is used in manufacturing and construction in many countries around the world. Mesothelioma is a cancer that is caused by exposure to asbestos. It grows in the lining of organs like the lungs. Generally, those who develop mesothelioma show no signs of illness for a long time after their first exposure. It … END_OF_DOCUMENT_TOKEN_TO_BE_REPLACED