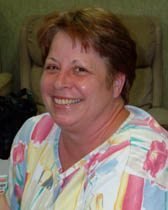 Ruth Phillips was born on July 12, 1952 and diagnosed with peritoneal mesothelioma on July 1, 1999 just eleven days before turning 47 years old.  As of this writing, she continues to do well.  Here is her story in her own words:

I was diagnosed at the Redmond Regional Medical Center in Rome, Georgia.  At first the diagnosis was ovarian cancer.  My diagnosis began with an exploratory laparotomy to find out why my colon was blocked for nine days. They made a sixteen-inch vertical incision and found the cancer had covered my omentum.  They removed that.  They also found that the cancer covered one-quarter of my abdominal wall and, according to the surgeon, there were ‘thousands and thousands of poppy-seed-sized tumors spread all over my large and small bowel.’  This, of course, was inoperable.

My surgeon and oncologist disregarded the initial pathology report which stated that I had mesothelioma and insisted that I had Stage 3B ovarian cancer instead.  A sigmoid colostomy bag was put in place and a couple of weeks later they installed a ‘Mediport’ in my chest.  I was rushed into one chemo treatment for ovarian cancer before the second opinion pathology report was rendered.  I insisted on this second opinion and it was provided by the Armed Forces Institute.  It also concluded that I did indeed have peritoneal mesothelioma.

After the mesothelioma diagnosis was confirmed, the doctors gave me a prognosis of eight to twelve months to live.  I was shocked, but determined.  I started doing research online and called many major American hospitals and cancer treatment centers including the Mayo Clinic, Cancer Treatment Centers of America, MD Anderson, and Johns Hopkins. None were getting impressive results with peritoneal mesothelioma and there were no clinical trials going on.  I also saw the ‘mesothelioma expert’ at Emory University Hospital near us in Atlanta, and he told us that he had never even seen a peritoneal case and wanted to continue doing the ovarian chemo until the neurological side effects were unbearable. So we went to Memorial Sloan Kettering in New York to consult with their mesothelioma expert, who had only seen seven cases of peritoneal mesothelioma in his career. He said his patients ‘seemed to live longer’ when heated chemo was poured directly into their abdominal cavities.  Unfortunately, he had not performed a study and could not say how much longer the patients lived.  I was not comfortable trusting a treatment where the outcome was defined as ‘seem to live longer.’  I wanted to actually live longer.

One evening I was watching an ABC-affiliate in Atlanta (WSB-TV).  They did a program about a cancer clinic I had never heard of called IAT which was located in the Bahamas.  What grabbed my attention was that the program focused on a mesothelioma patient who was being treated there and who was doing quite well.  I wanted to find out more and learned that IAT stands for Immuno-Augmentive Therapy.  It is a therapy that is designed to provide immunological treatments to people with cancer.  I learned that this clinic and its treatments were not FDA approved and considered “unproven” by all conventional medical organizations.  Nevertheless, I spoke to other patients who were getting good results there and I decided to try it.

Experience at the IAT Clinic

I started the IAT Treatment on November 30, 1999.  I spent three months at the clinic and received daily out-patient treatments from Monday through Friday.  Each day there was lab work taken in the morning and injections that I had to self-administer during the day. After three months, I returned home with sixteen weeks of shots for self-treatment. 1 I returned to IAT for two weeks every sixteen weeks for the first five years, then went every twenty-six weeks for two years.  In October 2008, I was approved for once a year follow-up.  The shots are carefully geared to my individual immune system so there is no ‘one-size-fits-all’ approach. That is why in the beginning you must go every sixteen weeks to check how your body is responding and if the shots are still the correct prescription.

I tried having my colostomy reversed in September 2001, but the surgeon was unable to resect the colon as cancer was definitely still present, but in much less quantity than two years earlier. I have since had an intestinal obstruction either from the cancer or from surgical adhesions and I spent twenty-six days in the hospital.  As an inpatient I had nasogastric tubes and IV feeding until the blockage was opened. In addition to IAT injections, I have worked hard to bring up my systemic pH, as I believe that cancer thrives in an acidic environment. For this I use the trace minerals Cesium & Potassium.  I also use an herbal agent from the Amazon called Graviola. 2 In addition, I do ionizing footbaths to remove toxins and have also done a homeopathic asbestos detoxification to help clear out the cause of the mesothelioma.

My husband has helped me tremendously.  He became a Computerized Health Screening Technician – practicing Electro Dermal (EAV) screening 3 , based on acupuncture and now does Nutritional Consulting for a living. This is a way to find out which herbs and supplements my body really needs rather than trying to guess which of the thousands of so-called immune supplements out there would help me. Four and one half years ago, I also began taking a nutriceutical from Canada called Immunocal that I tested extremely well for on the EAV.

Severe pelvic pain from the cancer and/or scar tissue and adhesions have required that I be on morphine-type drugs (such as Methadone, Dialudid, or Fentinyl) for the past seven years.  We have also done Neural Therapy 4 on my incisions this past year and it has helped decrease my need for the pain medications.

IAT has been the biggest part of my treatment, but I continued to have setbacks from frequent bouts of severe viral bronchitis that I had been having three to four times per year since infancy. The bronchitis would turn bacterial and I would require antibiotics and I would lose a month of treatment each time. The bronchitis would totally divert my immune system which I was trying to use to fight the cancer, so I would have setbacks until starting on the Immunocal. Since starting it four and a half years ago, I have had only two head colds and no bronchitis or flu so I know my immune system is on full-throttle now.

Doing the Things I Enjoy

I don’t have as much stamina as I used to, but I am ten years older now, so don’t know what 56 years old should feel like.  I am able to be up and around and out and about helping others and doing the things I enjoy.  On the other hand, I still have many bad days. The pain meds might be the biggest hindrance in stamina.  My employer of nine years terminated me when they found out my cancer was ‘terminal,’ so I was forced onto Social Security Disability and then started Medicare seven years ago. I can’t get insurance and who would hire me having to be gone six weeks per year for cancer treatment?  However, I help my husband help others with health problems.  We also do some volunteer work and enjoy helping others learn the Bible in our area.

I stopped having CT scans five years ago as they were inconclusive and exposed me to radiation for little information. Although I was diagnosed with mesothelioma almost ten years ago, my tumor marker test still picks up minute traces of the proteins that mesothelioma throws off.  I use the tumor marker tests at IAT as well as the EAV tests and only get CT-Scans if I end up with a blockage or other significant problem. For that reason, my doctors do not pronounce me cured of this cancer.

My advice for other patients is to try not to dwell on the word ‘cancer.’  It’s literally only a word.  A kind resident at Emory Hospital helped me early on by encouraging me to ‘think of living with the cancer, instead of dying from it.’  I have put my energy and resources into surviving and have found it incredibly empowering to take charge of my own cancer treatment and gather knowledge and cutting-edge technology that has helped me survive well beyond my initial prognosis of eight to twelve months. Most patients with mesothelioma who I have seen choose the radical surgical/chemo route, have not endured well, as their disease often returns somewhere else.  Therefore, I don’t recommend going the ‘traditional’ route until a patient is informed about all their treatment options and can make an informed decision.

If you would like to ask Ruth a question or get in touch with her, feel free to write her care of: [email protected] All cancer patients are advised to use extreme caution when considering any cancer treatment that is not FDA approved.  Please see Disclaimer below.

To reprint portions of this interview contact us at [email protected]

1 Today, new patients spend 8 weeks at the IAT Clinic for the initial visit instead of the 12 weeks we spent.

2 Graviola is derived from a tree in the rain forests of Africa, South America, and Southeast Asia. The bark, leaves, root, and fruits have been used as traditional remedies in many countries. Extracts of graviola have been shown to have antiviral, antiparasitic, antirheumatic, astringent, emetic, antileishmanial and cytotoxic  effects. Graviola has also been shown to be effective against multidrug resistant cancer cells line.  There are no large scale studies in humans on the effects of graviola. Alkaloids extracted from graviola may cause neuronal dysfunction and degeneration leading to symptoms reminiscent of Parkinson’s Disease.

3 EAV/Electro Dermal Screening or BioEnergetic Assessment is a non-invasive technology that uses a highly sensitive instrument to measure energetic disturbances in the energetic fields of the body.

Researchers in Iran tested the safety of a new version of the drug pemetrexed in patients with non-small cell lung cancer and malignant pleural mesothelioma. This drug is used to treat these patients when they are not able to get surgery for their cancer. The researchers were able to determine that pemetrexed is safe in patients with non-squamous non-small cell lung cancer. Treatment Choices Malignant pleural mesothelioma is a lung-related cancer like non-small cell lung cancer. It is caused by exposure to asbestos. Treatment for mesothelioma usually involves chemotherapy, radiation therapy, and surgery. Patients may receive more than one type of treatment. This is called multimodal therapy. Pemetrexed is a chemotherapy drug that interrupts the cell replication process that helps … END_OF_DOCUMENT_TOKEN_TO_BE_REPLACED