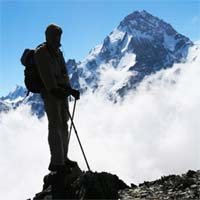 An Australian mountain climber who made headlines in 2006 by surviving a harrowing experience on Mt. Everest has died of mesothelioma. Fifty-six year old Lincoln Hall had climbed many of the world’s highest peaks, including Mt. Everest in 2006.  But when he developed serious symptoms of oxygen deprivation on the way down, he was left for dead by his climbing team. An American guide and his two clients found Hall the next day and sacrificed their own summit experience to save his life.  After treatment in a Nepal hospital for a chest infection, fluid on his brain and frostbite, Hall eventually returned to Australia where he was hailed as a hero. Despite the risks Hall took in his life, including his … END_OF_DOCUMENT_TOKEN_TO_BE_REPLACED

The MESOMICS project is the most comprehensive dataset of mesothelioma genomics to date. The data in this resource can help researchers to design precision treatments for mesothelioma patients This project was created by an international collaboration between scientists from France, Chile, and the United States. Understanding Diagnosis Malignant pleural mesothelioma is a rare cancer caused by asbestos exposure. There are approximately 2,000 cases of mesothelioma diagnosed in the United States alone every year. Because it is so rare, the treatment options are very limited compared to other types of cancer. The limited treatment options combined with the cancer’s ability to spread without being noticed makes mesothelioma a deadly disease. Median overall survival for mesothelioma patients is a little over a … END_OF_DOCUMENT_TOKEN_TO_BE_REPLACED