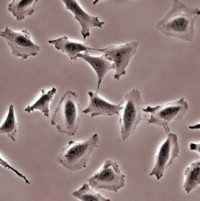 Doctors with Memorial Sloan Kettering Cancer Center in New York and the University of Minnesota in Minneapolis have just released a new report on cellular structures called tunneling nanotubes and their potential role in mesothelioma growth and proliferation. Tunneling nanotubes (TnT), which are also sometimes referred to as “membrane nanotubes” or “intercellular bridges” are actin-based extensions or tubes that function as channels for transporting materials and information between cells. Because tunneling nanotubes are one of the important ways cells communicate with each other, the researchers theorized that they may also play a role in mesothelioma and devised a series of experiments to try to determine what that role is. Among other findings, the researchers discovered that tissue taken from mesothelioma … END_OF_DOCUMENT_TOKEN_TO_BE_REPLACED

The MESOMICS project is the most comprehensive dataset of mesothelioma genomics to date. The data in this resource can help researchers to design precision treatments for mesothelioma patients This project was created by an international collaboration between scientists from France, Chile, and the United States. Understanding Diagnosis Malignant pleural mesothelioma is a rare cancer caused by asbestos exposure. There are approximately 2,000 cases of mesothelioma diagnosed in the United States alone every year. Because it is so rare, the treatment options are very limited compared to other types of cancer. The limited treatment options combined with the cancer’s ability to spread without being noticed makes mesothelioma a deadly disease. Median overall survival for mesothelioma patients is a little over a … END_OF_DOCUMENT_TOKEN_TO_BE_REPLACED