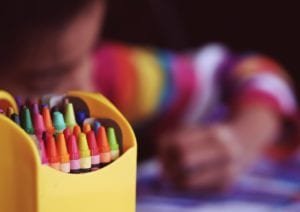 A group that tests common school supplies for toxins is warning parents to stay away from Playskool brand crayons sold at Dollar Tree stores because they could contain trace amounts of asbestos.

Even small amounts of asbestos have been linked to malignant mesothelioma, a rare but deadly cancer that can crop up decades after exposure.

It is believed the asbestos may have come from the talc used in crayon manufacturing. The two types of mineral deposits typically lie close to each other and talc mines are often contaminated with asbestos.

Could Crayons Really Cause Mesothelioma?

Just how dangerous are asbestos-contaminated crayons?

As late as the 1970s, asbestos was a common component in thousands of building and insulation products and can still be found in most homes built before 1981.

Unless fibers of the mineral dust are inhaled or swallowed, the health threat to homeowners is low. The risk of mesothelioma rises quickly, however, when homeowners decide to launch a renovation project that disturbs deteriorating asbestos.

The danger with crayons is that children routinely put them in their mouths. If a child swallows even a few fibers of asbestos, it could trigger a cascade of physiological changes that could lead to a mesothelioma diagnosis in adulthood.

“It’s insane for us to be finding asbestos in kids’ products, whether it’s technically legal or not, and parents shouldn’t have to worry about this in 2018,” Dev Gowda, an author of the PIRG report, told the New York Times.

The PIRG has asked Dollar Tree to remove the contaminated crayons from the shelves and warn customers of the risk of mesothelioma and lung cancer.

In an effort to reduce the risk for malignant mesothelioma, the  EPA and OSHA regulate the use of asbestos in the US, one of the few developed countries that has not banned the known carcinogen.

Unfortunately, some products still slip through the cracks and a number of asbestos-contaminated personal care products have made headlines recently amid mesothelioma fears:

The risk of mesothelioma from consumer products is not expected to improve any time soon. The EPA introduced a proposal this summer to overturn a ban on new uses of asbestos.

The MESOMICS project is the most comprehensive dataset of mesothelioma genomics to date. The data in this resource can help researchers to design precision treatments for mesothelioma patients This project was created by an international collaboration between scientists from France, Chile, and the United States. Understanding Diagnosis Malignant pleural mesothelioma is a rare cancer caused by asbestos exposure. There are approximately 2,000 cases of mesothelioma diagnosed in the United States alone every year. Because it is so rare, the treatment options are very limited compared to other types of cancer. The limited treatment options combined with the cancer’s ability to spread without being noticed makes mesothelioma a deadly disease. Median overall survival for mesothelioma patients is a little over a … END_OF_DOCUMENT_TOKEN_TO_BE_REPLACED