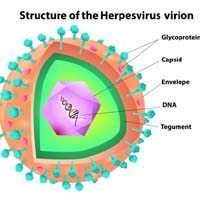 Researchers at a hospital in Sheffield, England are testing a potential new mesothelioma treatment based on the same virus that causes herpes.

The small-scale trial is the first in the world to test the modified herpes simplex virus, HSV1716, in human mesothelioma patients. HSV1716 has been genetically engineered to infect and kill cancer cells without harming healthy cells. In laboratory studies on mesothelioma and some other cancers, it has been shown to be effective at shrinking tumors while causing limited toxicity. Just as significantly, HSV1716 increased survival rates among mice with various human cancers.

The Phase I/II trial at Sheffield Experimental Cancer Medicine Centre is the next stage in development of HSV1716 as a viable mesothelioma treatment. The goal of the trial is to determine whether or not HSV1716 has the ability to shrink mesothelioma tumors in human patients and what is the safest effective dose.

“For us, it is terrifically exciting and the patients are very engaged in using this to target tumors rather than the blunderbuss approach of chemotherapy,” lead researcher Penella Woll recently told the UK newspaper, The Star. “If it does what we hope, it could be a major step forward.”

The Herpes Simplex Virus has been tested as a possible treatment for mesothelioma and other cancers since the mid-90s because of its malleability. The dangerous components of the virus can be removed without affecting its ability to enter and infect human cells, making it an ideal tool for inserting cancer-fighting genes into mesothelioma cells.

According to The Star, the Sheffield hospital treats about 100 mesothelioma patients a year, primarily older men who have been exposed to asbestos dust in an industrial setting. So far, three mesothelioma patients have received the HSV 1716 treatment, which is given as an infusion via a chest cavity drain.