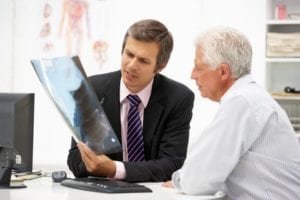 Having adjuvant radiotherapy after surgery may not help mesothelioma patients live any longer according to researchers at Duke and Stanford Universities.

Researchers used a database of pleural mesothelioma patients from Duke and a national registry to conduct the analysis.

While radiotherapy may help reduce mesothelioma symptoms for some patients, the results of the study suggest that it is unlikely to extend survival.

Radiation for Mesothelioma and Its Symptoms

Radiotherapy is a mainstay of cancer therapy for certain kinds of cancer. But the irregular shape and aggressive nature of mesothelioma tumors makes them less than ideal for radiation treatment.

Pleural mesothelioma patients who are healthy enough tend to get the best results from surgery. During mesothelioma surgery, doctors remove the diseased pleural membrane. They may also remove other at-risk tissues, including one of the lungs.

Targeted radiation may also help slow the growth of existing mesothelioma tumors. Doctors sometimes use it to reduce symptoms like the buildup of lung fluid.

Mesothelioma Survival With and Without Adjuvant Radiotherapy

The new study included patients with Stage I, II, or III pleural mesothelioma. There were 212 patients who had surgery at Duke University between 1996 and 2016. Researchers also included 1,615 mesothelioma patients from the National Cancer Database. These patients had surgery between 2004 and 2015.

The patients chosen to receive adjuvant radiotherapy usually had no signs of cancer around the edges where the tumor was removed. They also tended to be patients with more advanced mesothelioma.

“At a landmark time of 4.4 and 4.7 months from surgery, Duke and NCDB patients who received adjuvant radiation did not experience improved survival compared to those who did not receive radiation in multivariable analysis,” writes Dr. Vignesh Raman, a Duke thoracic surgeon who was lead author on the paper.

Duke patients who had adjuvant radiotherapy had similar recurrence rates as those who had none. It also took about the same amount of time for their cancer to start growing again or to occur on the other side of their chest. About half of them had mild side effects. But more than one in five had serious complications from radiation.

The report concludes that adjuvant radiotherapy does not improve the odds of surviving mesothelioma.

Malignant mesothelioma is an asbestos-linked cancer with few viable treatment options. About 2,500 Americans receive a mesothelioma diagnosis every year.