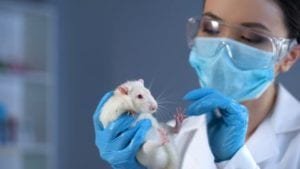 MIT cancer researchers teamed up with chemical engineers to test a new method for delivering genetic instructions to lung cells.

Mice that inhaled a formula designed to “tell” their lung cells to produce more of a certain protein did exactly that.

The team says it’s proof that this could be a viable method for treating cancer in the lungs. Pleural mesothelioma is a lung-related cancer caused by inhaled asbestos.

How Would an Inhalable Mesothelioma Treatment Work?

The study was led by scientists at MIT’s Koch Center for Integrative Cancer Research. It is based on two things scientists already know about cancer treatment.

One is that inhalation is a good way to deliver drugs directly  into the lungs.

The MIT researchers reasoned that delivering mRNA directly into the lungs might let them “program” lung cells to produce anticancer proteins.

Researchers are already testing mRNA-based treatments for malignant mesothelioma. An Inhalable mesothelioma treatment based on mRNA could be the next step.

To test their idea, researchers started with mRNA molecules that tell cells to produce luciferase. Luciferase is a bioluminescent or glowing protein. The goal was to make it easy to see which cells took the information and ran with it.

Next, the team mixed the mRNA into a formula that the mice could breathe in. The mixture was designed to linger in the lungs so that the mRNA could do its job.

When the team checked the mice 24 hours later, the lung cells were producing luciferase, just as they had hoped. The mRNA had been evenly distributed through all five lobes of the lungs.

Just as importantly, there was no glowing tissue outside of the lungs.

The Future of Inhalable Mesothelioma Treatment

Other scientists have also experimented with the possibility of an inhalable mesothelioma treatment.

In that study, asbestos-exposed mice that inhaled the resveratrol either never developed mesothelioma tumors or had smaller tumors.

Pleural mesothelioma is usually caused by inhalation of asbestos fibers. It is most common in people who have worked around asbestos in their job.