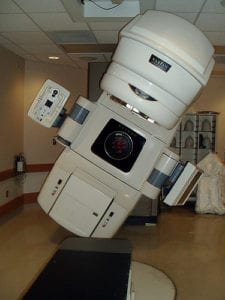 Researchers at the University of Ohio may have found a way to make radiation therapy more effective for people with mesothelioma and other types of solid tumors.

They’re using a muscle relaxant approved in the 1800s to increase the level of oxygen in cancer cells and make them more susceptible to the damaging effects of radiation.

The research could have wide-ranging implications, especially for patients fighting treatment-resistant malignancies like pleural mesothelioma.

The Limitations of Radiation for Pleural Mesothelioma

Mesothelioma is a fast-growing cancer associated with asbestos exposure that occurs on the membranes around internal organs.

Although the irregular shape and tricky location of mesothelioma tumors can make them difficult to treat with radiotherapy, advanced targeting techniques are making it more feasible than it has been in the past.

Unfortunately, even when the radiation can be mostly confined to the mesothelioma tumor, dosing still has to be limited.

If doctors delivered the amount of radiation that is really needed to permanently damage mesothelioma cells, they run the risk of doing serious damage to healthy cells and causing deadly side effects.

Part of the reason that it takes so much radiation to destroy cancer cells is that tumors are often hypoxic, meaning they have less oxygen in them than normal tissue. Cells that contain less oxygen are less sensitive to the effects of radiation.

Now, Dr. Benej and the University of Ohio research team may have found a way around the problem with a drug called papaverine. Originally approved in 1848 as a muscle relaxant, papaverine has the ability to stimulate mitochondria (organelles inside cells) to produce more oxygen.

If a mesothelioma tumor is well-oxygenated, it is going to be more responsive to radiation, which means doctors could theoretically have more impact on a tumor with less radiation.

Just as importantly, the researchers say this technique will not make healthy cells more sensitive to radiotherapy. The result should be increased effectiveness and decreased risk for side effects.

The team is now looking at derivatives of papaverine that may deliver the same results with even fewer side effects. The theory will have to be studied more extensively before it can be used in clinical practice.

Malignant pleural mesothelioma is a rare type of cancer. A growing number of mesotheliomas are being treated with novel immunotherapies. But clinicians still lack a meaningful way to measure mesothelioma treatment response. An article in Seminars in Nuclear Medicine lists five ways clinicians can measure how well a treatment plan is working. And a new artificial intelligence tool can measure mesothelioma tumors without any human input. Artificial intelligence may provide the key to treatment response in the future. Measuring Mesothelioma Treatment Response In malignant pleural mesothelioma, complex tumors result in inconsistent clinical assessment. There are five common ways to measure if a treatment plan is working. Generally, a clinician will look to see if the size or weight of a tumor has … END_OF_DOCUMENT_TOKEN_TO_BE_REPLACED