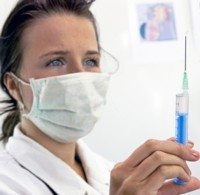 A new stem cell vaccine that has proven effective against malignant mesothelioma and several other cancers in mice might offer a promising new way to treat the asbestos cancer.

Although rare, malignant mesothelioma is one of the most treatment-resistant malignancies. Even with aggressive therapies, most people diagnosed with mesothelioma do not survive longer than about 18 months.

But research conducted at Stanford University and published in the journal Cell today may change that. It details the anti-tumor responses in the lab and in live mice to a vaccine composed primarily of pluripotent stem cells.

Pluripotent stem cells – also called iPS cells – are cells taken from the skin or blood that are treated with genes that “rewind their developmental clock.” The resulting cells are like immature cells without the built-in programming that turns them into all types of tissues in the body.

According to Stanford researchers, when injected into mice infected with breast cancer, mesothelioma, or melanoma, these cells essentially “prime” the immune system to attack tumors and even prevent new ones,.

“These cells, as a component of our proposed vaccine, have strong immunogenic properties that provoke a systemwide, cancer-specific immune response,” says lead study author Nigel Kooreman, MD. “We believe this approach has exciting clinical potential.”

In an article in the journal Cell, Kooreman and his colleagues explain that iPS cells are also a lot like cancer cells, which makes them ideal candidates for triggering an anti-cancer immune response.

In each case, mice that had been transplanted with one of these types of cancer were injected with different vaccine combinations once a week for four weeks. The tumors shrank in size in 7 out of 10 mice that received a combination of iPS cells and an immune-stimulating agent.

The mesothelioma mice showed a marked increase in tumor-infiltrating lymphocytes, an indication of the immune system’s activation.

In a news release distributed by Stanford University today, senior author Joseph Wu, MD, PhD, explained it this way: “Although much research remains to be done, the concept itself is pretty simple. We would take your blood, make iPS cells and then inject the cells to prevent future cancers. I’m very excited about the future possibilities.”

Malignant mesothelioma is an aggressive cancer that grows on the membranes around internal organs, especially the pleura around the lungs and the peritoneum around the abdomen. Fewer than 3,000 cases are identified in the US each year and most of these patients were exposed to asbestos decades before their diagnosis.

A Canadian study found that tracking trends in mesothelioma at the local level can help officials predict future mesothelioma cases. Most mesothelioma tracking efforts focus on the national scale and monitor cases across a country or region. This study, published in Cancer Causes and Control, looked at mesothelioma cases based on industrial sources of asbestos in Ontario and British Columbia. Growing Number of Cases Asbestos is a toxic material that is used in many commercial and industrial products. It’s durability and heat resistance made it very popular in products like construction materials, textiles, and vehicles. Mesothelioma is a deadly cancer caused by exposure to asbestos. It was first identified as a cancer-causing material in 1977 by the International Agency for … END_OF_DOCUMENT_TOKEN_TO_BE_REPLACED