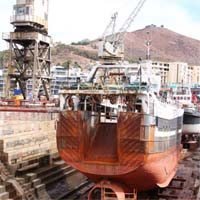 There’s more evidence of the dangers of shipbuilding in the early 20th century.  A new study out of Italy found a “high incidence of mesothelioma” among men who worked as shipbuilders in the 1940’s, 50’s and 60’s in Monfalcone. Mesothelioma is an aggressive cancer of internal membranes caused by exposure to asbestos. In order to track the incidence of the disease among Italian shipbuilders, a pair of researchers from Italy’s Center for the Study of Environmental Cancer examined the hiring records of the Monfalcone shipyard in 1942 and compared them with archived health records in the area’s hospitals decades later. A total of 2,776 people were hired to work in the Monfalcone shipyards in 1942. According to the Pathological Anatomy Unit archives … END_OF_DOCUMENT_TOKEN_TO_BE_REPLACED