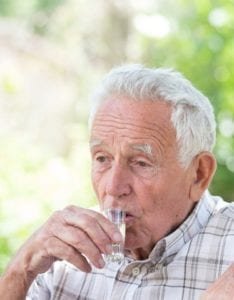 A new study on the link between drinking and cancer risk may make people at risk for mesothelioma think twice about their alcohol consumption.

The new study is the latest to draw a direct line between drinking and cancer risk. According to the report released this week, more than 4 percent of new cancer cases last year were linked to alcohol use.

Asbestos exposure is the main cause of mesothelioma. But not everyone who is exposed to asbestos gets mesothelioma. Genetic factors play a role. But the new alcohol study suggests that drinking could also be a catalyst for cancer development.

The Link Between Drinking and Cancer Risk

The new study was conducted by scientists from the International Agency for Research on Cancer (IARC) and appears in the latest issue of The Lancet Oncology. It is a population-based study. This means it focuses on the drinking habits of large groups of people, rather than on individuals.

The study on drinking and cancer risk says alcohol caused about 741,000 new cancer cases last year. The vast majority of those cases (86 percent) occurred in heavy drinkers. But 1 in 7 were attributed to light to moderate alcohol consumption – up to two drinks per day.

“Even light to moderate drinking has a significant impact on the burden of cancer.” writes IARC researcher and lead study author Harriet Rumgay.

Malignant mesothelioma is not mentioned in the new study. Mesothelioma is one of the world’s rarest cancers. But the report did find a direct link between drinking and cancer risk of the oral cavity, pharynx, larynx, esophagus, colorectum, liver, and breast.

What is the Message for Mesothelioma Patients?

Even though the study focuses on just a few cancers, it contains a clear message for people at risk for mesothelioma and other malignancies: Drinking may increase your risk.

This is not the first study to find a link between drinking and cancer risk but it is one of the largest.

Researchers at the National Cancer Institute and in Northern Ireland analyzed data on nearly 100,000 adults in 2018. That study also found that people who had more than two drinks a day were more likely to die of cancer. But not every study on alcohol has found a negative correlation.

Findings from other studies on drinking and cancer risk:

These studies seem to suggest that any protective effects from wine come from components other than the alcohol.

To safely navigate drinking and cancer risk, asbestos-exposed individuals and mesothelioma patients who drink should discuss the pros and cons of alcohol consumption with their healthcare provider.

Kunzmann, AT, et al, “The association of lifetime alcohol use with mortality and cancer risk in older adults: A cohort study”, June 19, 2018, PLoS Med, eCollection

Benvenuto, Monica, et al, “The Potential Protective Effects of Polyphenols in Asbestos-Mediated Inflammation and Carcinogenesis of Mesothelium”, May 9, 2016, Nutrients

Researchers in Iran tested the safety of a new version of the drug pemetrexed in patients with non-small cell lung cancer and malignant pleural mesothelioma. This drug is used to treat these patients when they are not able to get surgery for their cancer. The researchers were able to determine that pemetrexed is safe in patients with non-squamous non-small cell lung cancer. Treatment Choices Malignant pleural mesothelioma is a lung-related cancer like non-small cell lung cancer. It is caused by exposure to asbestos. Treatment for mesothelioma usually involves chemotherapy, radiation therapy, and surgery. Patients may receive more than one type of treatment. This is called multimodal therapy. Pemetrexed is a chemotherapy drug that interrupts the cell replication process that helps … END_OF_DOCUMENT_TOKEN_TO_BE_REPLACED