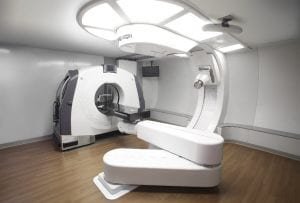 Pleural mesothelioma patients who undergo radiotherapy after their surgery tend to live longer than those whose treatment plan does not include radiation.

Unfortunately, only a small percentage of patients who could stand to benefit from this treatment actually get it.

Researchers at Houston Methodist Hospital, Baylor, and The University of Texas have come to that conclusion after analyzing data from the National Cancer Database on nearly 25,000 patients with malignant pleural mesothelioma from 2004 to 2013.

It was the largest study of adjuvant radiotherapy for mesothelioma ever conducted.

Although radiotherapy is not routinely used in mesothelioma treatment, when it is used, it is typically either palliative as a way to relieve symptoms, or as an add-on (adjuvant) treatment after surgery.

The idea behind adjuvant radiotherapy is to prevent the seeding of new mesothelioma tumors by destroying any mesothelioma cells that might have been left behind after surgery. This is particularly critical with mesothelioma, which tends to grow and spread quickly.

The new Texas study focused on adjuvant radiotherapy in mesothelioma patients who underwent either extrapleural pneumonectomy (EPP) or lung-sparing pleurectomy with decortication (PD) surgery. A third group that had neither therapy was included as a baseline reference.

To assess the impact of radiotherapy on survival, the research team divided pleural mesothelioma patients into two groups – those who only had surgery and those who had surgery followed by adjuvant radiotherapy.

After accounting for other variables associated with mesothelioma survival, the researchers found that adjuvant radiotherapy increased the odds that a patient would still be alive more than a year after surgery.

“In the whole cohort, the surgery plus radiotherapy group had a higher median survival (21.4 months) compared to surgery alone (16.59 months).” writes lead author and radiation oncologist Gary Lewis, MD, of the University of Texas Medical Branch. The mesothelioma patients who had neither type of intervention had an overall survival rate of just 7.5 months.

Although there appeared to be a clear advantage to undergoing both surgery and radiation, the researchers found that only 3 percent of pleural mesothelioma patients were actually treated this way.

Having a tumor confined to one region of the chest, having few other health problems, and having private insurance and/or higher income raised the chances that a patient would receive adjuvant radiotherapy. It was used more often in mesothelioma patients who underwent the more radical EPP surgery than it was in those who had PD.

Patients who received adjuvant radiotherapy were also more likely to receive chemotherapy, which also had a positive impact on their survival.

After two years, nearly 43 percent of patients who had had both surgery and radiotherapy were still alive while only 16.6 percent of the no-local-treatment group were living.

Researchers say the study points to the need for more data on the use of adjuvant radiotherapy in the treatment of the asbestos cancer.

“In the treatment of malignant pleural mesothelioma, adjuvant radiotherapy after surgical intervention was associated with improved overall survival,” the team writes. “Our findings highlight the need for additional prospective data.”\

A new study from the University of Sydney showed that cannabis had some anti-cancer effects in mesothelioma. Parts of the marijuana plant have been used for centuries to treat a wide variety of ailments. This includes cancers like pleural and peritoneal mesothelioma and cancer-related pain. We have all heard of medical marijuana. Various states have either legalized its use for specific patients. Many are reviewing its legality for various diseases. Cannabis and Mesothelioma Survival Mesothelioma is a deadly disease with few treatment options. Alternative treatments consist of any approach considered non-conventional. This may include herbs, vitamins, minerals, and other natural non-toxic supplements. When used with conventional approaches, these alternative modalities are often called “complementary.” Surveys suggest that over 70% of … END_OF_DOCUMENT_TOKEN_TO_BE_REPLACED