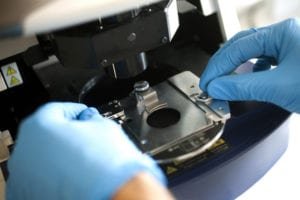 In what could be a step closer to a mesothelioma cure, French cancer researchers say they have identified two of the key genetic pathways responsible for triggering mesothelioma in asbestos-exposed people.

Led by Inserm (The French National Institute of Health and Medical Research), the study focused on mice that had been genetically engineered with mutations on certain tumor-suppressor genes known to play a role in malignant mesothelioma in people.

Learning About Human Mesothelioma from Mice

In the experiment, published in the International Journal of Molecular Sciences, some of the genetically engineered mice, as well as some normal (wild type) mice, were exposed to asbestos while others were not.

The goal was to understand exactly what is happening at the molecular level to cause malignant mesothelioma in certain people who live or work around asbestos dust. If the exact molecular mechanism can be better understood, it may open the door for more effective mesothelioma treatments.

A Brief History of Asbestos and Mesothelioma

Asbestos was widely used in a variety of industries in the early 1900s because of its strength, abundance, and resistant to corrosion, heat, and flame. But when asbestos workers began to get sick and die decades after working with the mineral, scientists saw a pattern.

Eventually, they realized that, even though it could take many years for it to trigger the changes that lead to this rare and deadly cancer, asbestos was the cause of most cases of pleural and peritoneal mesothelioma.

In more recent years, many cancer researchers around the globe have focused their efforts on trying to understand the complex mechanisms behind mesothelioma as a path toward a cure.

Right now, even with the most advanced treatments, most people diagnosed with mesothelioma die of the disease within 12 to 18 months.

The Inserm study revealed two key genetic pathways that appear to be directly involved in mesothelioma carcinogenesis: Cdkn2a and Trp53.

The Cdkn2a (cyclin dependant kinase inhibitor 2a) gene carries the codes for a set of proteins which act as tumor suppressors by regulating the cell cycle. Mutations on this gene are common in the majority of human cancers.

The second important genetic pathway, which is also implicated in many other types of cancer, is Trp53 which encodes for the tumor protein p53. The p53 protein is expressed at low levels in normal cells and at high levels in cancer cells and some pre-cancerous cells.

In 1997, France became one of the 55 countries to pass a complete ban on asbestos because of its link to malignant mesothelioma, lung cancer, and other health problems. Contrary to what many people think, asbestos is not banned in the US, and is still present in tens of thousands of older homes and buildings.

Approximately 2,500 Americans are diagnosed with mesothelioma each year.

An international group of researchers have provided recommendations for countries to create a mesothelioma registry. Mesothelioma registries are great tools to monitor the negative effects of asbestos. It can help to identify clusters of asbestos exposure. Registries can also track the impact of asbestos reduction programs. Asbestos Health Risks Asbestos is a naturally occurring mineral that has been found throughout the world. Even though it is toxic, it is used in manufacturing and construction in many countries around the world. Mesothelioma is a cancer that is caused by exposure to asbestos. It grows in the lining of organs like the lungs. Generally, those who develop mesothelioma show no signs of illness for a long time after their first exposure. It … END_OF_DOCUMENT_TOKEN_TO_BE_REPLACED