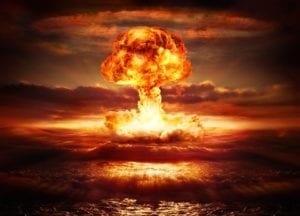 A study published in a US medical journal shows atomic military veterans faced a higher risk from asbestos exposure during their service than they did from radiation.

The study published last summer focused on more than 100,000 veterans. These veterans participated in at least one of 230 above-ground nuclear weapons tests between 1945 and 1962. The tests took place at eight nuclear test sites.

Some soldiers participated in military maneuvers, observed nuclear weapons tests, or provided technical support. Others served on board ships or were stationed on islands during or after nuclear tests.

In spite of their proximity to radioactive weapons, atomic military veterans were more likely to die of an asbestos-related illness like mesothelioma than a radiation-related illness. The study is a sobering reminder of the continuing legacy of asbestos exposure among veterans.

Asbestos is a naturally-occurring mineral and a known carcinogen. In the decades before scientists realized how toxic it was, asbestos-containing products were common in military ships, planes and vehicles.

A significant number of military veterans who spent time living on or servicing ships were later diagnosed with malignant mesothelioma. Mesothelioma is more common among Navy veterans than any other branch of the Armed Services. This is probably because of the large amount of asbestos on ships.

Asbestos fibers stay in the body after they are inhaled. These fibers work their way deep into the tissues over time, causing chronic irritation and inflammation. That inflammation can lead to mesothelioma in military veterans many years later.

There is no cure for mesothelioma, which tends to resist standard cancer treatments. It is almost always fatal within a year of diagnosis.

About 235,000 military personnel took part in nuclear weapons tests between 1945 and 1962. The 2020 report focused on 114,270 male service members who were there for these tests. Most were enlisted men born before 1930 who served in the Navy at the Pacific Proving Ground.

The researchers used Nuclear Test Personnel Review records from the Department of Defense to estimate how much radiation these vets probably absorbed. Then they looked at how they died.

The study showed that, after 50 years, military veterans were more likely than the general public to have died of smoking-related cancers. This was probably due, in part, to the availability of cigarettes in military rations.

But the biggest difference between military veterans and the general public was seen in their rates of mesothelioma. “The highest SMR [standard mortality ratio] was for mesothelioma (SMR 1.56) which was correlated with asbestos exposure in naval ships,” writes author John Boice, an epidemiologist at Vanderbilt.

There was no evidence that the men had higher rates of radiation-related cancers like leukemia.“No statistically significant radiation associations were observed among 114,270 nuclear weapons test participants followed for up to 65 years,” the authors conclude.

Rates of asbestosis, another deadly asbestos-related lung disease, were also elevated among the military veterans.