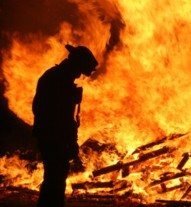 A 5-year National Institute for Occupational Safety and Health (NIOSH) study of U.S. firefighters is the first to confirm what has long been suspected: Firefighters are definitely at higher risk for malignant mesothelioma.

The study examined the mortality patterns and cancer incidence (including mesothelioma) among 30,000 firefighters in three major cities. The study subjects were all career firefighters who started their careers after 1950 and were followed through 2009. In order to get a diverse sample of firefighters from across the country, the study focused on firefighters from San Francisco, Chicago and Philadelphia.

Comparing firefighters to a sampling of the general public, the study looked at 92 causes of death and 41 cancer incidence groupings, with a focus on 15 specific diseases, including mesothelioma. Although other previous studies have also found links between firefighting and cancers like mesothelioma, the larger study population and longer time period of the current study strengthens the scientific evidence, according to the researchers.

Although mortality among firefighters from all causes was no higher than that of the general public, the study did find a higher incidence of cancer, especially digestive and respiratory cancers like mesothelioma. “This study is the first to report excess malignant mesothelioma among U.S. firefighters,” the authors concluded in the journal Occupational and Environmental Medicine. “Results appeared robust under differing assumptions and analytic techniques.”

The findings are novel but not unexpected. Asbestos, the cause of mesothelioma worldwide, was common in building products for decades and is a known exposure hazard for firefighters. According to health authorities, asbestos does not pose a health hazard when it is safely encased behind walls or intact in ceiling panels or floor tiles.  However, the dust created when it begins to crumble is highly toxic to anyone who comes in contact with it.

The NIOSH firefighter study began in 2010 and involved multiple trips to the studied cities by NIOSH and U.S. Fire Administration officials. It’s goal is to establish new guidelines and safety protocols to better protect firefighters against mesothelioma and other cancers. The study is the largest firefighter health study ever conducted, due, in part, to the better-than-expected participation and cooperation of fire departments.

Researchers in Iran tested the safety of a new version of the drug pemetrexed in patients with non-small cell lung cancer and malignant pleural mesothelioma. This drug is used to treat these patients when they are not able to get surgery for their cancer. The researchers were able to determine that pemetrexed is safe in patients with non-squamous non-small cell lung cancer. Treatment Choices Malignant pleural mesothelioma is a lung-related cancer like non-small cell lung cancer. It is caused by exposure to asbestos. Treatment for mesothelioma usually involves chemotherapy, radiation therapy, and surgery. Patients may receive more than one type of treatment. This is called multimodal therapy. Pemetrexed is a chemotherapy drug that interrupts the cell replication process that helps … END_OF_DOCUMENT_TOKEN_TO_BE_REPLACED