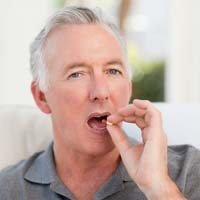 A pill that makes cancer cells glow under infrared light may have the capacity to improve the diagnosis of malignant mesothelioma.

So far, the pill, being developed by researchers at the University of MIchigan with funding from the NIH, has only been tested on breast cancer tumors in mice.

But it was so effective at exposing hidden clusters of cancer cells, that the research team expects it to be useful in the diagnosis of other cancers, too. That could eventually include mesothelioma.

Mesothelioma, a fast-growing cancer caused by asbestos exposure, is diagnosed in about 2,500 new patients in the US each year. About 2,000 of them have pleural mesothelioma, the most common type.

Since mesothelioma symptoms don’t typically occur until many years after asbestos exposure, mesothelioma is almost always diagnosed at an advanced stage. This drastically reduces the likelihood of treatment success and mesothelioma survival rates are among the worst of any cancer.

But, if mesothelioma could be identified earlier, potentially even before symptoms develop, it is much more likely to be treatable. The same is true of many types of cancer.

The possibility of earlier, more accurate cancer diagnosis is the idea behind the new molecular imaging pill.

The pill contains two parts. One part is based on an experimental cancer treatment drug that failed to fight cancer in clinical trials but was successful at transporting the treatment agent into the bloodstream, which is a big part of the battle in getting drugs where they need to go.

The second part contains an infrared dye that targets particular molecules found on cancer cells and in the blood vessels that feed them. In most types of molecular imaging studies, the dye is injected. But a small percentage of people can have a serious reaction to this dye.

Putting the delivery agent and the dye together creates a pill that effectively delivers dye to cancer cells without the potential side effects of injection. In the new study of the diagnostic pill, none of the breast cancer mice had a reaction to the dye.

Infrared light has the ability to penetrate tissue. When it hits the dye inside of the cancer cells, tumors “light up”.

The hope is that the method would make it possible to diagnose breast cancer and other types of malignancies without the use of ionizing radiation, which poses its own risks.

According to University of Michigan assistant professor of chemical engineering and biomedical engineering, Greg Thurber, who led the research team, “This approach should be adaptable to other molecular targets and diseases for use as a new class of screening agents.”

Currently, mesothelioma diagnosis is done through a combination of imaging scans, blood and fluid tests for biomarkers, biopsies, and careful history.

The new report appears in a recent issue of the journal Molecular Pharmaceutics.

An international group of researchers have provided recommendations for countries to create a mesothelioma registry. Mesothelioma registries are great tools to monitor the negative effects of asbestos. It can help to identify clusters of asbestos exposure. Registries can also track the impact of asbestos reduction programs. Asbestos Health Risks Asbestos is a naturally occurring mineral that has been found throughout the world. Even though it is toxic, it is used in manufacturing and construction in many countries around the world. Mesothelioma is a cancer that is caused by exposure to asbestos. It grows in the lining of organs like the lungs. Generally, those who develop mesothelioma show no signs of illness for a long time after their first exposure. It … END_OF_DOCUMENT_TOKEN_TO_BE_REPLACED