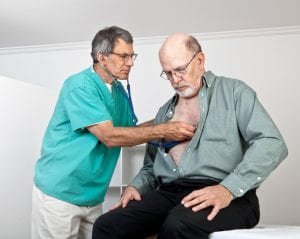 Irradiating the sites where mesothelioma treatments are performed as a way to prevent new tumors is “effective, well tolerated, simple, fast and cost effective”.

According to French researchers this prophylactic radiotherapy has the potential to extend mesothelioma survival with few downsides.

Malignant Mesothelioma Can Spread After Intervention

A number of mesothelioma treatments involve the insertion of some kind of instrument into the tumor site. In some cases, these may be drains to remove fluid (called pleural effusions) that collects around the lungs as malignant mesothelioma tumors grow.

In other cases, they may be needles or other instruments for collecting cell samples during ultrasound-guided needle biopsies or mesothelioma tumor resection.

Any time an instrument is inserted into the tumor area and removed, there is the possibility of inadvertently “seeding” tiny new tumors along its tract. Because radiotherapy disturbs the DNA of cells along the insertion path, some studies have suggested that it may help keep pleural mesothelioma from gaining a foothold there.

To test the theory, researchers with CHRU De Nancy hospital in northern France reviewed the cases of 91 pleural mesothelioma patients who underwent at least one kind of intervention followed by prophylactic radiotherapy. Patients were treated between 1990 and 2013 at the Cancer Institute of Lorraine in Nancy, France.

Most had some type of thoracoscopic procedure – either a biopsy or surgery – with video guidance. Seventeen patients had open-chest procedures called thoracotomies with chest drains. Twelve underwent needle biopsies under CT or ultrasound guidance.

At 12 months, only 8 percent of patients had experienced a recurrence of mesothelioma tumors at the intervention sites. In cases where tumors did form, it took a median of four months. Just as importantly, there were no serious (Grade II or higher) side effects as a result of these prophylactic mesothelioma treatments.

“Irradiation of pleural intervention sites with a single fraction of 10Gy is effective, well tolerated, simple, fast and cost effective,” concludes the report in Cancer Radiotherapie.

Unfortunately, this study is not the last word on the value of prophylactic radiotherapy after malignant mesothelioma procedures  A 2016 UK study of more than 200 pleural mesothelioma patients concluded that irradiating the procedure tracts was no more effective at preventing the spread of mesothelioma than just treating new tumors when they cropped up.

The MESOMICS project is the most comprehensive dataset of mesothelioma genomics to date. The data in this resource can help researchers to design precision treatments for mesothelioma patients This project was created by an international collaboration between scientists from France, Chile, and the United States. Understanding Diagnosis Malignant pleural mesothelioma is a rare cancer caused by asbestos exposure. There are approximately 2,000 cases of mesothelioma diagnosed in the United States alone every year. Because it is so rare, the treatment options are very limited compared to other types of cancer. The limited treatment options combined with the cancer’s ability to spread without being noticed makes mesothelioma a deadly disease. Median overall survival for mesothelioma patients is a little over a … END_OF_DOCUMENT_TOKEN_TO_BE_REPLACED