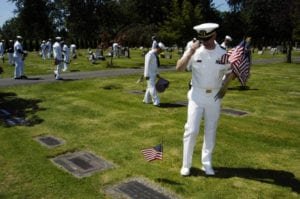 On this day when the US honors its fallen heroes, it is important to remember that not all who lost their lives from military service died on the battlefield.

In fact, many died decades later of the rare asbestos-linked cancer, mesothelioma, as a result of exposure to asbestos in the military. Others are still battling this aggressive and incurable malignancy.

Scientists have suspected a link between the fibrous mineral asbestos and malignant mesothelioma since as early as the 1930s. That was when miners and those who processed asbestos for a variety of uses began to get sick from a mysterious lung-related disease.

But many decades passed and many people died—both in and outside of the military—before the Armed Services recognized the connection between asbestos and malignant mesothelioma and curtailed its use of the toxin.

Asbestos Use on Naval Ships

Asbestos is a naturally-occurring mineral that is fire and heat resistant, strong, inexpensive and plentiful. Before it was linked to diseases such as pleural mesothelioma, lung cancer, and asbestosis, it was a common building material and insulator.

The Navy is known to have used asbestos in boiler rooms, around pipes, and in valves and gaskets on its vessels until as late as the 1970s. Because they were often in close quarters with the material on their ships, Navy veterans and Merchant Marines have one of the highest rates of mesothelioma of any population.

Sailors who worked in areas where asbestos was used, those who were involved in repair or overhaul of ships, or those who were present when a ship was damaged during attack, often breathed in or ingested asbestos dust.

Once it is inhaled or swallowed, fibers from this dust stay in the tissues, triggering changes that can result in mesothelioma many decades later. Often, Naval veterans who were exposed to  asbestos when they were young do not develop mesothelioma symptoms until they are seniors.

Naval Veterans Not the Only Ones at Risk

But living on a Navy ship was not the only way for veterans to come in contact with asbestos.

Millions of shipyard workers were also exposed, especially during World War II when the US added thousands of new ships to its fleet. It is estimated that thousands of metric tons of asbestos were used by the men and woman who built and repaired these vessels.

According to one source, while the combat death rate was 18 per 1,000 at this time, approximately 14 per 1,000 shipyard workers died of mesothelioma.

Even many Air Force veterans were put at risk for mesothelioma by the asbestos used to build their base housing and the asbestos found in the brakes, engine heat shields, gaskets, and insulation in the airplanes themselves.

In the US, about 2,500 people each year receive a diagnosis of mesothelioma, a cancer of the lung and abdominal lining that typically carries a poor prognosis.  About a third of those cases occur among veterans.

Standard treatment for mesothelioma includes some combination of chemotherapy, surgery, and/or radiotherapy. Immunotherapy and gene therapy are also being investigated as potential therapeutic options for mesothelioma patients.

An extension of the Veterans Choice Program, which was signed by the President this spring, will help ensure that veterans with mesothelioma can continue to access mesothelioma care closer to home. The act allows veterans to receive full coverage for civilian medical care if they cannot easily access care from a VA provider.

Malignant pleural mesothelioma is a rare type of cancer. A growing number of mesotheliomas are being treated with novel immunotherapies. But clinicians still lack a meaningful way to measure mesothelioma treatment response. An article in Seminars in Nuclear Medicine lists five ways clinicians can measure how well a treatment plan is working. And a new artificial intelligence tool can measure mesothelioma tumors without any human input. Artificial intelligence may provide the key to treatment response in the future. Measuring Mesothelioma Treatment Response In malignant pleural mesothelioma, complex tumors result in inconsistent clinical assessment. There are five common ways to measure if a treatment plan is working. Generally, a clinician will look to see if the size or weight of a tumor has … END_OF_DOCUMENT_TOKEN_TO_BE_REPLACED