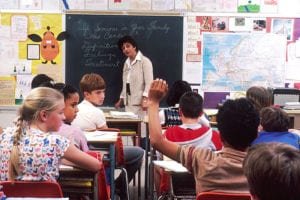 Even though teaching is not a profession typically associated with asbestos exposure, a newly published report out of Wisconsin offers a disturbing reminder of the mesothelioma risk posed by asbestos, wherever it is found.

Researchers with the Wisconsin Department of Health Services and the University of Wisconsin analyzed mesothelioma incidence in the state between 1997 and 2013.

They discovered that, not only are there higher numbers of malignant mesothelioma cases among people in construction and manufacturing — two areas that have often been linked to mesothelioma — but the incidence also appears to be elevated among teachers.

Malignant mesothelioma is the most deadly of a group of illnesses associated with exposure to asbestos, a fibrous mineral that was once widely used in both construction and manufacturing.

Asbestos’ high tensile strength and resistance to heat, flame, and corrosion made it a seemingly ideal choice for products like insulation, floor and ceiling tiles, and even paints and joint compounds. It was even added to cement to give it strength and woven into fire-resistant clothing for firefighters.

Once scientists understood the impact of asbestos on the body, causing not only pleural or peritoneal mesothelioma but also lung cancer, asbestosis and pleural plaques, laws were put in place to regulate its use.

Unfortunately, the material was already in tens of thousands of homes, public buildings, and schools — many of which are still in use.

Mesothelioma Risk in the Classroom

It can take decades for an asbestos-exposed person to develop mesothelioma symptoms. In recent years, a growing number of teachers both in the US and internationally, have been diagnosed with mesothelioma after years of working in asbestos-contaminated classrooms.

As asbestos breaks down, it becomes friable or dusty. An activity as simple as putting a thumbtack in a wall with crumbling asbestos insulation behind it can be enough to release a few of the deadly fibers into the air.

The more often a teacher is exposed to these fibers, the higher the likelihood that he or she will eventually receive a mesothelioma diagnosis. A report released in the UK last month found that 200 British teachers have been diagnosed with mesothelioma since 2001.

Report Says Government Has Failed to Protect Teachers from Asbestos

Almost half of all US schools were built between 1950 and 1969 when asbestos use was at its peak.

Although OSHA was established in 1970 to help protect American teachers and other workers from occupational hazards like asbestos, scientists and advocacy groups say its continued presence in thousands of schools still poses a threat to both teachers and students.

Researchers in Italy say a virus normally found in goats could offer a new, safer way to kill malignant mesothelioma cells and improve patient outcomes.  The virus is caprine herpesvirus 1 (CpHV-1). It has been blamed for bouts of spontaneous abortions in goat herds. But it does not appear to cause any disease in humans. In fact, previous studies show CpHV-1 can kill several types of human cancer cells.  The newest study of CpHV-1 was conducted at the National Cancer Institute IRCCS G. Pascale Foundation in Naples. Scientists there made two important discoveries. They found that not only can CpHV-1 kill mesothelioma cells without harming normal cells, but it might also have the potential to make chemotherapy work better.  Mesothelioma … END_OF_DOCUMENT_TOKEN_TO_BE_REPLACED