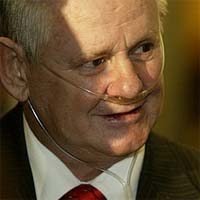 Australia’s ongoing mesothelioma problem will soon be the subject of a two-part television miniseries.

Produced by Australia’s ABC network and starring some of the country’s most respected actors, “The Devils Dust” tells the story of mesothelioma victim Bernie Banton.  Banton was a long time employee of James Hardie, an Australian manufacturer of fiber cement building products.  For years, the company added asbestos to its cement to increase its strength and durability.  After Banton was diagnosed with pleural mesothelioma in 1999, he became an advocate for mesothelioma sufferers throughout the country.

Although mesothelioma cases like Banton’s are tragically common in Australia, Banton’s case was brought into the national spotlight largely because of the book “Killer Company”, by journalist Matt Peacock.  It was Peacock who exposed the fact that James Hardie knew about the mesothelioma/asbestos link more than 20 years before it ever warned employees or the public of the danger. “Killer Company” is the basis for the upcoming miniseries.

When asbestos is inhaled or ingested, as it clearly was by hundreds of James Hardie employees like Banton, shards of the fibrous mineral become imbedded in the thin tissue that surrounds the lungs or abdominal cavity. Over time, the continual irritation and inflammation caused by these shards can bring about cellular changes that lead to mesothelioma. Mesothelioma is a highly aggressive cancer with a poor prognosis. Australia continues to have one of the highest per capita rates of mesothelioma in the world with 3 new cases per 100,000 people. According to the ABC network, 60,000 Australians are expected to die of asbestos diseases like mesothelioma by 2030.

In “Killer Company”, Peacock not only relates Banton’s personal struggle with mesothelioma and his work as a victim’s advocate, but graphically illustrates many incidents of careless asbestos exposure in and around James Hardie. Workers reportedly ate their lunches near the asbestos they worked with and neighborhood children played in the asbestos waste dumped outside.

Five out of ten Korean oncologists surveyed feel positive about using an aerosolized chemotherapy system called PIPAC for mesothelioma and other types of cancer. PIPAC stands for pressurized intraperitoneal aerosol chemotherapy. The system turns liquid chemotherapy drugs into a spray that can be applied with a nebulizer. It was developed to treat surface malignancies like peritoneal mesothelioma that can be hard to treat with standard methods.  PIPAC can be used in conjunction with mesothelioma surgery or by itself as either a palliative or curative treatment.  The technology is still very new. Many doctors have never used it. But research conducted by the Seoul National University College of Medicine shows Korean doctors are ready to embrace it. How Spray-on Chemotherapy Works … END_OF_DOCUMENT_TOKEN_TO_BE_REPLACED