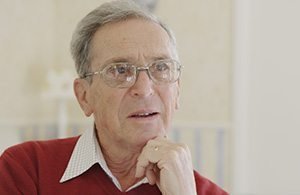 Paul Kraus is considered the longest documented mesothelioma survivor in the world. He was diagnosed in 1997 with mesothelioma so widespread that he was given little hope of survival. Not willing to give up, he worked with a team of doctors to create his own tailored treatment protocol. This protocol included dramatic life style change, experimental therapies, dietary changes, mind-body medicine, and other modalities. Paul was fortunate. The protocol he and his doctors created helped him keep the mesothelioma in check.

His book “Surviving Mesothelioma and Other Cancers: A Patient’s Guide” details his cancer voyage, the decisions he made, and his philosophies about health and healing. This book is now the best-selling mesothelioma book in the world and has inspired countless patients. Dr. Bernie Siegel, M.D. said, “Paul Kraus’ book has all the information a cancer patient needs to have in order to learn what survival behavior is about.”

Paul believes that his survival is related to his belief that “a diagnosis is not destiny” and that “people can conquer cancer because there is far more to this illness than just a doctor’s bad news.”

A new study shows that a multifaceted approach to quitting smoking can help patients diagnosed with cancer. One rare type of cancer is mesothelioma. This cancer is caused by exposure to asbestos. It occurs in the lining of different parts of your body, usually in the abdomen or the lungs. Mesothelioma often takes decades to develop after being exposed to asbestos. The symptoms can be hard to diagnose because they look like other, more common diseases. This makes treating mesothelioma more difficult, too. The cancer has more time to spread while doctors are struggling to make a diagnosis. There are other factors that make cancers like mesothelioma difficult to treat. Smoking after a cancer diagnosis can lead to worse survival … END_OF_DOCUMENT_TOKEN_TO_BE_REPLACED