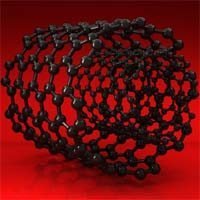 There’s more evidence that carbon nanotubes, cylindrical carbon molecules used in nanotechnology, electronics, optics and other fields, may cause mesothelioma in the same way that asbestos does.

Because of their special mechanical and electrical properties and their ability to conduct heat, nanotubes are being added to an increasing number of structural materials, including the carbon fiber used to make baseball bats, golf clubs and car parts. As a result, more people who work in manufacturing and scientific fields are likely to be exposed to nanotubes.

But a new published study suggests that, if these tiny fibers accidentally enter the lungs through inhalation, they can act very much like crocidolite asbestos fibers and eventually trigger mesothelioma. Crocidolite is a common type of asbestos and a common cause of mesothelioma, an aggressive cancer of the membranes around the lungs and other organs. Research shows that when asbestos fibers are inhaled, they can lodge deep in the lung tissue causing chronic irritation, an inflammatory immune response, and, in some cases mesothelioma.
Asbestos is the cause of mesothelioma.  Because the shape of nanotubes is so similar to asbestos fibers, nanotubes appear to cause a similar reaction. To test the theory, Japanese researchers sprayed the lungs of lab rats with a solution containing aerosolized crocidolite asbestos fibers or nanotubes. The mice were given the solution 5 times over a 9-day period. At the end of the nine days, fluid was collected from the pleural cavity, lungs and chest walls. Nanofibers and crocidolite fibers were found in the white blood cells (macrophages) deep in the alveoli. They were also found in the nearby lymph nodes, as the rats’ bodies tried to rid themselves of the foreign substances.

But the most telling results involved the mesothelial lining: According to the researchers, “Both multi-walled carbon nanotubes and crocidolite treatment induced hyperplastic proliferative lesions of the visceral mesothelium…” These lesions are often the beginnings of mesothelioma. Although the fibers were not found in the lesions themselves, they appeared to be the result of inflammation in the lungs and pleural cavity, probably triggered by the fibers.

The researchers concluded that, like asbestos, carbon nanotubes had the potential to produce “mesothelial proliferation potentially associated with mesothelioma development.”

A Canadian study found that tracking trends in mesothelioma at the local level can help officials predict future mesothelioma cases. Most mesothelioma tracking efforts focus on the national scale and monitor cases across a country or region. This study, published in Cancer Causes and Control, looked at mesothelioma cases based on industrial sources of asbestos in Ontario and British Columbia. Growing Number of Cases Asbestos is a toxic material that is used in many commercial and industrial products. It’s durability and heat resistance made it very popular in products like construction materials, textiles, and vehicles. Mesothelioma is a deadly cancer caused by exposure to asbestos. It was first identified as a cancer-causing material in 1977 by the International Agency for … END_OF_DOCUMENT_TOKEN_TO_BE_REPLACED