Home / News / Chemotherapy for Mesothelioma May Work Better with TroVax 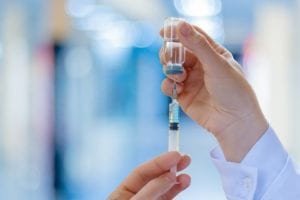 UK researchers say a cancer vaccine called Trovax has the potential to boost the power of chemotherapy for mesothelioma.

Chemotherapy is the main treatment for malignant pleural mesothelioma. Mesothelioma is a cancer of the lung lining caused by asbestos exposure. It is very hard to treat.

Even people who have chemotherapy for mesothelioma do not usually live more than two years after diagnosis.

Mesothelioma researchers are always looking for ways to improve chemotherapy for mesothelioma. It is often combined with other treatments like surgery, radiation or immunotherapy.

Now, scientists think adding TroVax to mesothelioma chemotherapy may be another good option.

What is the TroVax Cancer Vaccine?

The TroVax cancer vaccine is made by UK-based Oxford BioMedica. It contains an altered virus that has been engineered to make a human tumor protein called 5T4.

Mesothelioma cells and several other types of cancer produce high levels of 5T4.

The TroVax cancer vaccine prompts the immune system to look for 5T4 and kill cancer cells. It has been shown to shrink some types of tumors. It may also help extend the time between treatment and cancer recurrence.

Combining TroVax with Chemotherapy for Mesothelioma

In the new study, researchers gave TroVax to patients having chemotherapy for mesothelioma. The goal of the study was to assess the safety of the combination and decide on the most effective dose.

The study included 27 patients. These patients had advanced mesothelioma tumors or tumors that had spread. They all received standard chemotherapy with pemetrexed (Alimta) and cisplatin.

Along with chemotherapy, researchers gave the patients up to nine injections of TroVax.

The vaccinations started two weeks before chemotherapy for mesothelioma. They continued while chemotherapy was going on and afterward for a total of six months.

Nearly all of the patients showed the immune response researchers were hoping for.

In 70 percent of patients, their mesothelioma tumors stopped growing temporarily. The median time until they started growing again was 6.8 months.

Seventeen percent of the patients had an even better response. Their mesothelioma tumors shrunk slightly.

The side effects of the combination treatment were about the same as standard chemotherapy for mesothelioma. Overall survival among the study subject was 10.8 months. But the researchers concluded that the results were promising enough to justify a bigger study.

The trial, which goes by the nickname SKOPOS, was paid for by Cancer Research UK.