Home / News / Could Other Gene Mutations Be Behind Mesothelioma? 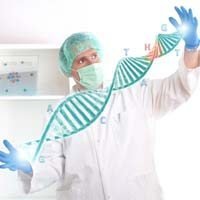 A mutation of the BAP1 gene may not be the only reason mesothelioma can sometimes run in families. A more complex genetic picture may also help explain why some asbestos-exposed workers get the disease and some do not.

Exposure to asbestos is the number one cause of malignant mesothelioma, an aggressive cancer that starts on the membranes that surround internal organs. But only a tiny percentage of people exposed to asbestos – many of whom were construction workers, asbestos plant employees, or veterans – ever contract mesothelioma. Past studies have explained the disparity, in part, by showing that a mutation on the BAP1 gene appears to make some people more susceptible to the damaging effects of asbestos.

But a new report suggests that BAP1 mutation may not tell the whole story. The report details the case of an Italian family in which eight family members contracted malignant pleural mesothelioma and several others have gotten lung cancer or other kinds of pleural tumors. The patients had all been exposed to asbestos in their home. But the case is notable because mesothelioma is normally so rare, even among people who have been exposed to asbestos.

When the researchers performed a DNA sequence analysis to evaluate the genes of the sick family members, they found no evidence of an inherited BAP1 mutation. Other genes identified as “potentially relevant” to a mesothelioma diagnosis also revealed no mutation. However, a DNA microarray analysis of tissue from two of the mesotheliomas showed what the researchers called “multiple genomic imbalances”.

“Given the existence of unspecified malignant pleural tumors and lung cancers in a prior generation, we discuss the possibility that some other tumor susceptibility or modified gene(s) may contribute to the high incidence of mesothelioma in this family,” writes study author Yuwaraj Kadariya of the Fox Chase Cancer Center in Philadelphia.

Because the incidence of mesothelioma is so much higher in this family than it is even among industrial workers heavily exposed to mesothelioma, the research team concludes that genetics must play some role, though they do not yet know what it is. Although the genetic propensity for mesothelioma is not fully understood, scientists believe is it likely that most cases are a result of the complex interaction between genes and asbestos.

Researchers in Iran tested the safety of a new version of the drug pemetrexed in patients with non-small cell lung cancer and malignant pleural mesothelioma. This drug is used to treat these patients when they are not able to get surgery for their cancer. The researchers were able to determine that pemetrexed is safe in patients with non-squamous non-small cell lung cancer. Treatment Choices Malignant pleural mesothelioma is a lung-related cancer like non-small cell lung cancer. It is caused by exposure to asbestos. Treatment for mesothelioma usually involves chemotherapy, radiation therapy, and surgery. Patients may receive more than one type of treatment. This is called multimodal therapy. Pemetrexed is a chemotherapy drug that interrupts the cell replication process that helps … END_OF_DOCUMENT_TOKEN_TO_BE_REPLACED