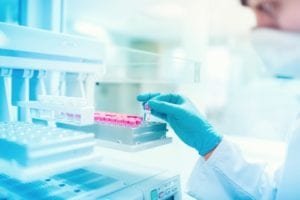 A new study appears to contradict some of what scientists thought they knew about early detection of mesothelioma.

Malignant mesothelioma is a rare but highly aggressive cancer. It usually happens because of past asbestos exposure.

Early detection of mesothelioma is key to improving survival. But it is notoriously hard to make a mesothelioma diagnosis. Many patients who have mesothelioma do not even know it until the cancer is in its advanced stage. As a result, most do not live more than a year.

Some studies have suggested that tiny, non-coding bits of RNA could help doctors detect mesothelioma earlier. But new research in Germany brings that idea into question.

Biomarkers for Early Detection of Mesothelioma

MiRNAs are well-known signposts or “biomarkers” for several types of cancer. Biomarkers offer a simple, inexpensive, and minimally invasive way to look for cancer.

Some scientists think miRNAs could be effective biomarkers for early detection of mesothelioma, too.

To test the theory, occupational medicine researchers at the Institute of the Ruhr University Bochum examined plasma samples from 17 mesothelioma patients. The patients were all part of a bigger 10-year study of more than 2,500 asbestos-exposed German workers.

The median time between blood sample collection and mesothelioma diagnosis was 8.9 months.

Researchers compared the miRNAs in the mesothelioma samples to samples taken from 34 other people who had asbestos exposure but did not have mesothelioma.

MiRNAs May Not Be Sensitive Enough

The researchers used three different types of circulating miRNAs for their tests. They extracted the miRNAs from blood plasma. The results were not promising.

“The analyzed miRNAs failed to detect the cancer in prediagnostic samples, showing that they are not feasible for the early detection of malignant mesothelioma,” writes study author Daniel Weber.

While miRNAs may not be helpful for early detection of mesothelioma, they may still have a role to play. The German researchers conclude that miRNAs could potentially be used to measure how well a patient’s tumor is responding to mesothelioma treatment.

“But this needs to be analyzed in appropriate studies,” cautions Weber.