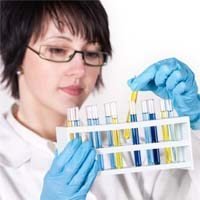 Cancer researchers in New York say they have found a new way to help determine prognosis for people with malignant pleural mesothelioma. In a report in the Annals of Surgical Oncology, a team of doctors from Memorial Sloan Kettering Cancer Center say patients whose cancer cells tested positive for an enzyme called CD10 had more aggressive mesothelioma and shorter survival times.

CD10 is an enzyme coded by the MME gene and found in various normal tissues. It acts on certain hormones and cytokines in the body and has been linked to Alzheimer’s disease and acute lymphocytic leukemia as well as some lymphomas and myeloma. Although it is known to make certain cancers more aggressive, it has never been tested as a prognostic factor for mesothelioma.

The New York research team tested tumor cells from 176 mesothelioma cases for CD10 and found the enzyme in 93 percent of the sarcomatoid mesothelioma tumors and 79 percent of the biphasic tumors. Among the epithelioid mesothelioma tumors (the most common type), those whose cells all looked the same (non-pleomorphic) had lower CD10 expression, and better prognosis, than those with the pleomorphic subtype. No matter which kind of mesothelioma a patient had, those whose tumor cells tested positive for CD10 had the most aggressive cancer and the poorest outcomes.

The MESOMICS project is the most comprehensive dataset of mesothelioma genomics to date. The data in this resource can help researchers to design precision treatments for mesothelioma patients This project was created by an international collaboration between scientists from France, Chile, and the United States. Understanding Diagnosis Malignant pleural mesothelioma is a rare cancer caused by asbestos exposure. There are approximately 2,000 cases of mesothelioma diagnosed in the United States alone every year. Because it is so rare, the treatment options are very limited compared to other types of cancer. The limited treatment options combined with the cancer’s ability to spread without being noticed makes mesothelioma a deadly disease. Median overall survival for mesothelioma patients is a little over a … END_OF_DOCUMENT_TOKEN_TO_BE_REPLACED