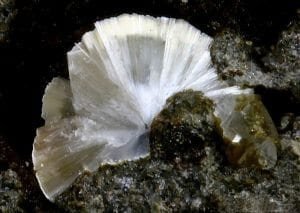 Like asbestos, erionite occurs naturally in some soils and is made up of tiny, sharp fibers. Like asbestos, once these fibers enter the lungs through inhalation of dust, or the stomach through accidental ingestion, they can trigger a series of physiological changes in some people that eventually result in cancer.

The findings on erionite-induced mesothelioma are not encouraging. According to the data, erionite may be even more toxic in the lungs than asbestos and may be more likely to cause mesothelioma in multiple family members.

“Erionite has a higher degree of carcinogenicity with possible genetic transmission of erionite susceptibility in an autosomal dominant fashion,” writes author Elamin Elamin, MD of the University of South Florida’s Critical Care Medicine and Sleep Department. The results also suggest that it does not always take a lot of erionite to trigger mesothelioma. While most cases of erionite-induced mesothelioma occurred after high levels of exposure, some cases occurred with much less.

The research team found that Chest CT was a more reliable diagnostic tool than chest X-ray and that pleural effusion, a build-up of fluid in the lungs, was the most common finding. Chemotherapy with cisplatin and mitomycin was shown to be the most common drug treatment for erionite-related mesothelioma, but the authors note that, as with asbestos mesothelioma, “cure of the disease is extremely rare.”

In parts of Turkey, where rock containing erionite was used to construct houses, there are record numbers of mesothelioma cases. Erionite has also been found in gravel used to pave thousands of miles of roads in North Dakota.

Researchers in Italy say a virus normally found in goats could offer a new, safer way to kill malignant mesothelioma cells and improve patient outcomes.  The virus is caprine herpesvirus 1 (CpHV-1). It has been blamed for bouts of spontaneous abortions in goat herds. But it does not appear to cause any disease in humans. In fact, previous studies show CpHV-1 can kill several types of human cancer cells.  The newest study of CpHV-1 was conducted at the National Cancer Institute IRCCS G. Pascale Foundation in Naples. Scientists there made two important discoveries. They found that not only can CpHV-1 kill mesothelioma cells without harming normal cells, but it might also have the potential to make chemotherapy work better.  Mesothelioma … END_OF_DOCUMENT_TOKEN_TO_BE_REPLACED