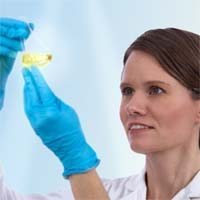 An experimental enzyme-based therapy for malignant mesothelioma has now moved into the second phase of testing in England.

The manufacturer of ADI-PEG 20 says the first patient has been enrolled in the Phase 2 clinical trial of the drug under the direction of scientists at the Centre for Experimental Cancer Medicine, Barts Cancer Institute, Queen Mary University of London.

The treatment is based on the idea that certain tumor cells are unable to produce a metabolic enzyme that normal cells already have. Cells need the enzyme, called argininosuccinate synthetase, to produce the amino acid arginine, which is necessary for growth and replication. In a previous study, 63 percent of patients with malignant mesothelioma were found to have little or no argininosuccinate synthetase in their tumor tissues.

When tumor cells lack the internal machinery to make arginine, they have to obtain it from outside sources. ADI-PEG 20 depletes the supply of arginine available to the tumor cells causing them to die. In prior studies, the viability of mesothelioma cells suffered when they were deprived to arginine. Normal cells, which continue to produce their own arginine, are unaffected.

ADI-PEG 20 is already being tested for the treatment of small-cell lung cancer. The new Phase 2 mesothelioma trial is supported by Cancer Research UK (CR-UK). In addition to Barts Cancer Institute, the randomized trial, known by the acronym ADAM (Arginine Deiminase and Mesothelioma), will also include hospitals in Belfast, Cambridge, Hull, Manchester and Southampton.

The drug is manufactured by a biopharmaceutical company called Polaris Group. Executive vice president for medical affairs John Bomalaski, MD, says “Our belief is that ADI-PEG 20 will play a key role in the future as single agent therapy or in combination chemotherapy for several cancers that continue to evade effective treatment.”

Mesothelioma is an asbestos-linked cancer that often is not diagnosed until decades after the initial exposure. An estimated 3,000 people are diagnosed with mesothelioma in the U.S. each year.

The MESOMICS project is the most comprehensive dataset of mesothelioma genomics to date. The data in this resource can help researchers to design precision treatments for mesothelioma patients This project was created by an international collaboration between scientists from France, Chile, and the United States. Understanding Diagnosis Malignant pleural mesothelioma is a rare cancer caused by asbestos exposure. There are approximately 2,000 cases of mesothelioma diagnosed in the United States alone every year. Because it is so rare, the treatment options are very limited compared to other types of cancer. The limited treatment options combined with the cancer’s ability to spread without being noticed makes mesothelioma a deadly disease. Median overall survival for mesothelioma patients is a little over a … END_OF_DOCUMENT_TOKEN_TO_BE_REPLACED