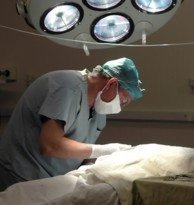 A method of delivering heated chemotherapy drugs to the abdomen after the surgical wound has been closed may produce better outcomes than an open technique for fragile or elderly mesothelioma patients.

The study was conducted by surgery departments at three different Greek hospitals. Study subjects included 105 patients with either mesothelioma or another peritoneal malignancy. All of the patients were recommended for cytoreductive surgery to remove as much of their cancer as possible followed by a rinse of heated chemotherapy drugs at the site of the surgery (HIPEC) to kill any residual cancer cells and prevent recurrence.

Twenty-two (55%) of the patients who underwent the open HIPEC procedure developed serious complications afterward and two died shortly after the procedure. In the closed group, 18 patients (40%) had serious complications but none died. The biggest difference between the two techniques appeared to be in their impact on blood flow; central venous pressure, pulse rate, and systolic blood pressure were all reported to be lower in the closed group than the open group.

The results prompted the study’s authors to conclude that the closed method may be the method of choice for the frailest patients with abdominal cancers like mesothelioma because of its “more stable hemodynamic parameters.” Their conclusions appear in a recent issue of the International Journal of Surgical Oncology.

Cytoreductive surgery followed by HIPEC has become a popular method for treating peritoneal mesothelioma, an aggressive asbestos-linked cancer that starts on the peritoneal lining of the abdomen and can spread easily to other abdominal organs. Control of mesothelioma with either the open or closed technique has been shown to be about the same.

Researchers in Iran tested the safety of a new version of the drug pemetrexed in patients with non-small cell lung cancer and malignant pleural mesothelioma. This drug is used to treat these patients when they are not able to get surgery for their cancer. The researchers were able to determine that pemetrexed is safe in patients with non-squamous non-small cell lung cancer. Treatment Choices Malignant pleural mesothelioma is a lung-related cancer like non-small cell lung cancer. It is caused by exposure to asbestos. Treatment for mesothelioma usually involves chemotherapy, radiation therapy, and surgery. Patients may receive more than one type of treatment. This is called multimodal therapy. Pemetrexed is a chemotherapy drug that interrupts the cell replication process that helps … END_OF_DOCUMENT_TOKEN_TO_BE_REPLACED