Home / News / In Search of a Second Line Option for Mesothelioma 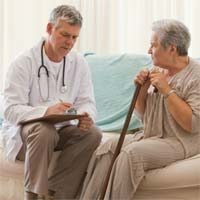 The fact that cancer researchers are not focusing on one type of therapy in their efforts to develop a second line mesothelioma treatment may be hurting the chances of finding one that works.

That is the conclusion of a team of Greek researchers who recently performed a retrospective study of second line mesothelioma therapies currently in use.

What is a Second Line Mesothelioma Therapy?

Second line therapy means a mesothelioma treatment that can be used after first line therapy either fails to work or stops working.

The gold standard therapy for malignant pleural mesothelioma (the most common type of mesothelioma) is a combination of pemetrexed (Alimta) and a platinum-based drug like cisplatin. Unfortunately, because mesothelioma is extremely resistant to treatment, even these drugs work less than half the time to slow or reverse mesothelioma tumor growth.

Since first line treatments are far from 100 percent effective, scientists recognize the urgent need to find a viable second line treatment for mesothelioma..

To evaluate some of the possible second-line treatment options available to mesothelioma patients, researchers at the University of Athens School of Medicine did a retrospective analysis of 98 mesothelioma cases at their center.

The study involved closely examining each patient’s case, including all of the different treatments that were used during the course of their disease and how well they worked.

Although no one experienced a reversal of their tumor growth on that combination, it stabilized the growth in 22 percent of patients. It took about 3 months for their mesothelioma to start growing again after this treatment. Median overall survival was about 15 months.

Eighteen percent of those who had second line mesothelioma therapy received a drug called docetaxel. Although a third of these patients stopped taking the drug because they developed problems on it, the overall survival on this drug was slightly longer at 23 months.

The remaining eight patients had a third type of second line mesothelioma treatment. They got either a second round of pemetrexed-based chemotherapy or pemetrexed alone. Median overall survival among this small subset of patients was the longest at 29 months.

But the Greek researchers say these results do not offer much useful information about second line mesothelioma treatment because they are all so different and the groups who took them so varied.

The fact that no single second line therapy has been shown to be most effective does not mean that a particular therapy cannot help a particular mesothelioma patient. If you or a family member is battling mesothelioma and has failed at first line chemotherapy, your doctor will work with you to determine if a second line treatment could help.