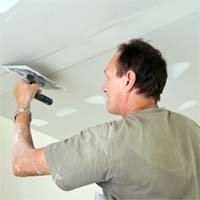 Two recent news stories highlight the fact that construction workers are often at higher risk for mesothelioma. The risk comes from exposure to asbestos, a toxic mineral once widely used as an insulator and building product additive. After asbestos dust was linked to malignant mesothelioma in the 1960s, workplaces began to implement protective measures. However, the long delay from time of asbestos exposure to development of mesothelioma means the measures came too late for some workers.

A group of sick electricians and carpenters in New York is a case in point.   More than a hundred independent contractors are alleging that long-term asbestos exposure at the county-owned Nassau Coliseum in Uniondale, NY, caused them to develop mesothelioma and other asbestos illnesses. According to CBS News, 140 people have filed notices of claims, the first step toward filing a class action lawsuit against the county, the New York Islanders hockey team, and the facility management company. The group could be seeking as much as a billion dollars.

At the same time, a sick drywall worker has won a $27 million mesothelioma lawsuit in California. Michael Sutherland started working in construction in high school in 1967 and continued to do drywall work for San Diego County for more than 25 years. “With all the trades working on top of each other trying to finish one job and move on to the next, it was always dusty,” Sutherland told legal website Lawyers.com. Sutherland said it wasn’t until he attended a job safety class in 2003 that he learned how much asbestos had likely been in that dust. He was diagnosed with mesothelioma in May 2012.

Because of its strength and resistance to fire and erosion, asbestos was once added to joint compound, stucco, roofing materials and even cement. Although the material is not considered a mesothelioma threat when it is intact, the powdered form of any asbestos-containing product is hazardous. Once it has hardened, drilling or scraping of drywall can turn joint compound or stucco back into dangerous dust. Asbestos dust can stay in the lungs for decades potentially causing mesothelioma, asbestosis, lung scarring and lung cancer.

Like many drywall workers with mesothelioma, Sutherland was likely exposed to asbestos dust when he or others mixed up joint compound powder or when he sanded the compound in place after it had dried. Sutherland’s suit charged that the Highland Stucco and Lime Products company failed to warn about the mesothelioma risk posed by its product.

An international group of researchers have provided recommendations for countries to create a mesothelioma registry. Mesothelioma registries are great tools to monitor the negative effects of asbestos. It can help to identify clusters of asbestos exposure. Registries can also track the impact of asbestos reduction programs. Asbestos Health Risks Asbestos is a naturally occurring mineral that has been found throughout the world. Even though it is toxic, it is used in manufacturing and construction in many countries around the world. Mesothelioma is a cancer that is caused by exposure to asbestos. It grows in the lining of organs like the lungs. Generally, those who develop mesothelioma show no signs of illness for a long time after their first exposure. It … END_OF_DOCUMENT_TOKEN_TO_BE_REPLACED