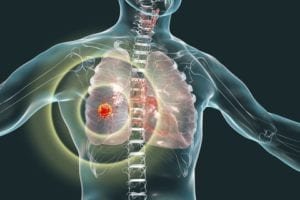 Some evidence suggests that radiating the chest wall after a procedure might prevent mesothelioma metastasis in that area. But a three-year mesothelioma research study appears to refute the idea.

Malignant pleural mesothelioma is a rare cancer but it is also fast-growing. Mesothelioma metastasis to other parts of the chest is common. These metastatic tumors can impact the lungs and other organs.

As mesothelioma spreads in the chest, fluid can collect around the lungs, causing breathing problems and chest pain. Doctors may pierce the chest wall with an instrument to drain off the fluid. Collecting cells for mesothelioma biopsy may also require a chest wall puncture

Mesothelioma metastasis along the instrument tract or on the chest wall can be a serious problem. In some centers, doctors have tried to prevent this by routinely irradiating these areas.

Radiation kills cancer cells by disrupting their DNA so they cannot replicate. But it is also risky because it can damage healthy cells, too.

The goal of the new study was to determine whether chest wall radiation to prevent mesothelioma metastasis is worth the risk.

The Risk of Prophylactic Radiation

Between 2012 and 2015, 375 mesothelioma patients at 54 UK hospitals took part in the study. They all had procedures that required doctors to insert an instrument through the chest wall.

Half of the patients received chest wall radiation afterward and half did not.

“No significant difference was seen in the incidence of chest wall metastases (CWM) at 6 months between the prophylactic radiotherapy and no radiotherapy groups,” reports lead investigator Neil Bayman, MD.

Even though there was no difference in the amount of mesothelioma metastasis in the chest, there were problems.

After analyzing the results, the researchers conclude, “There is no role for the routine use of prophylactic irradiation to chest wall procedure sites in patients with malignant pleural mesothelioma.”