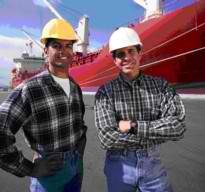 Taiwanese researchers who conducted one of the few long-term studies of cancer among shipbreaking workers are calling for more “preventive measures” to protect these workers from deadly malignant mesothelioma.

Mesothelioma is the most serious of a group of diseases caused by exposure to asbestos. Fire- and heat-resistant asbestos was commonly used to insulate ships starting in the 1920s, long before its health risks became public knowledge. People who now work to dismantle and demolish these old ships run the risk of encountering crumbling asbestos and raising their lifetime risk of mesothelioma.

Noting that shipbreaking remains one of the world’s most dangerous jobs, public health and occupational medicine experts from several Taiwanese universities studied cancer incidence among more than 4,000 shipbreaking workers between 1985 and 2008. Health data was taken from a Shipbreaking Workers Union database and the Taiwan Cancer Registry.

“Asbestos-related diseases, including lung cancer and mesothelioma, were seen in excess in these shipbreaking workers and some cases appeared to have a dose-dependent relationship,” reports the team led by Dr. Wei-Te Wu of the National Health Research Institutes.

According to the study in the journal Environmental Research, shipbreaking workers had a higher overall cancer risk, as well as an elevated lifetime risk of cancer in the mouth, trachea and lungs. There were 368 cancer cases among the studied workers, including 53 cases of lung-related cancers. The study found that mesothelioma was more common among people who worked as flame cutters.

Multiple studies have demonstrated the risk of mesothelioma among people involved in building ships in the 1940s, 50s, and 60s. At a busy shipbuilding operation in Hampton Roads, Virginia alone, there were 632 cases of mesothelioma – seven times the national average – between 1982 and 2000. Today, as more of these aging ships are decommissioned, an increasing number of shipbreaking workers face a similar the risk of asbestos exposure and eventual mesothelioma development.

In the U.S., OSHA rules for protecting workers from asbestos aboard old ships are comparable to those for construction workers. But much of the world’s shipbreaking now takes place overseas where labor is inexpensive and protections against asbestos exposure are often more lax. The Taiwanese team notes the lack of long-term research on people involved in shipbreaking and says the situation deserves further study.

Source:
Wu, WT et al, “Cancer incidence of Taiwanese shipbreaking workers who have been potentially exposed to asbestos”, May 14, 2014, Environmental Research, Epub ahead of print

The MESOMICS project is the most comprehensive dataset of mesothelioma genomics to date. The data in this resource can help researchers to design precision treatments for mesothelioma patients This project was created by an international collaboration between scientists from France, Chile, and the United States. Understanding Diagnosis Malignant pleural mesothelioma is a rare cancer caused by asbestos exposure. There are approximately 2,000 cases of mesothelioma diagnosed in the United States alone every year. Because it is so rare, the treatment options are very limited compared to other types of cancer. The limited treatment options combined with the cancer’s ability to spread without being noticed makes mesothelioma a deadly disease. Median overall survival for mesothelioma patients is a little over a … END_OF_DOCUMENT_TOKEN_TO_BE_REPLACED