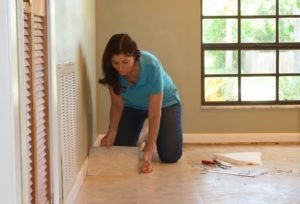 An ad campaign launched by Australia’s top asbestos awareness organization has issued a warning about the mesothelioma risk for homeowners doing renovations.

Asbestos is the number one cause of mesothelioma around the world. Australia has a long history with both asbestos and mesothelioma. The country banned asbestos in 2003 but there is still plenty of it around. Thousands of homes and buildings built before 1990 contain asbestos.

There is a mesothelioma risk for homeowners who come in contact with this asbestos. Mesothelioma is an aggressive and deadly cancer that can kill within months of diagnosis.

If people remodel or attempt renovations without having their home checked for asbestos first, the campaign says they are playing “renovation roulette” with their lives.

How a Remodel Can Pose a Mesothelioma Risk for Homeowners

Asbestos is a naturally-occurring fibrous mineral. It was a popular additive to more than 3,000  construction products, including insulation, floor and ceiling tiles, wallboard, and cement.

When left undisturbed, it does not usually pose a health risk. But when asbestos fibers become airborne, such as during a renovation or remodeling project, they can pose a mesothelioma risk for homeowners or anyone nearby.

The fibers stay in the body of a person who inhales or swallows asbestos dust. Asbestos fibers are sharp and harder than other foreign substances for the body to expel. Over time, asbestos fibers can trigger cancerous changes in the cells of internal membranes.

Australian Women and the “Third Wave” of Mesothelioma

The mesothelioma risk for homeowners is highest among Australian women. Women make up the biggest segment of renovators in Australia. The Australian Mesothelioma Registry released new figures this week showing a 67 percent rise in mesothelioma deaths among women since 2012. That compares to just over 9 percent for men.

“With the alarming increase in women’s deaths from asbestos-related diseases, it’s vital that we start to respect the dangers of asbestos and always have older homes inspected by licensed asbestos assessors before taking up tools,” warns Cherie Barber, host of a popular Australian renovation reality show. Ms. Barber is Ambassador for the National Asbestos Awareness Campaign.

The mesothelioma risk for homeowners in Australia is part of the third wave of malignant mesothelioma. The first wave of mesothelioma happened among mostly male miners and manufacturers. In some cases, the wives who washed their contaminated clothes also contracted mesothelioma.

The second wave occurred among people (mostly men) in construction trades who worked with asbestos-containing products. The third wave represents the mesothelioma risk for homeowners and others involved in renovating Australian buildings that contain asbestos.

The US EPA says there is no safe level of asbestos exposure. The mesothelioma risk for homeowners can be eliminated by hiring professionals to inspect and remove asbestos before attempting renovations.

A Canadian study found that tracking trends in mesothelioma at the local level can help officials predict future mesothelioma cases. Most mesothelioma tracking efforts focus on the national scale and monitor cases across a country or region. This study, published in Cancer Causes and Control, looked at mesothelioma cases based on industrial sources of asbestos in Ontario and British Columbia. Growing Number of Cases Asbestos is a toxic material that is used in many commercial and industrial products. It’s durability and heat resistance made it very popular in products like construction materials, textiles, and vehicles. Mesothelioma is a deadly cancer caused by exposure to asbestos. It was first identified as a cancer-causing material in 1977 by the International Agency for … END_OF_DOCUMENT_TOKEN_TO_BE_REPLACED