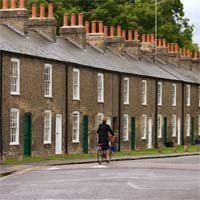 The mesothelioma death of an elderly English man is more evidence of the danger posed by aging asbestos, especially in the country’s vintage prefab homes.

Although Arthur Brown was 91-years old and had multiple health problems, the fact that he died of mesothelioma, the asbestos-linked cancer, has made headlines in England because, unlike most mesothelioma sufferers, he had never worked in the asbestos industry or lived with anyone who had.  Just as concerning is the fact that Brown’s wife also died of this very rare cancer.

Brown and his wife spent much of their adult lives in one of the more than 150,000 prefab houses built in Britain just after World War II. Ordered by Winston Churchill as an inexpensive way to help the country rebuild after the war, many of the houses were made of asbestos concrete and covered with asbestos shingles. Some were even outfitted with built-in ovens encased in asbestos, an economical building component that was sturdy and readily available.

Although they were designed to last just 10 years, a number of these prefab structures are still standing, most in poor condition. Now that asbestos has been clearly linked to mesothelioma and a host of other serious health problems, concern over these deteriorating homes has risen. Many have been destroyed but at least one mesothelioma death been attributed to asbestos inhaled during an unsafe prefab demolition project. In the case of Arthur Brown and his wife, their vintage home appears to have been their primary source of asbestos exposure.

While the 40’s-era prefab houses contain more asbestos than most buildings, tens of thousands of older homes across Great Britain and the U.S. also pose a mesothelioma risk.  Asbestos was routinely used in roof and floor tiles, concrete, some types of wallboard, paints and adhesives, and in all kinds of insulation for more than 30 years. The older the asbestos is, the more likely it is to become dry and ‘friable’ (prone to break down into inhalable dust) and trigger mesothelioma.  The risk is compounded when this friable asbestos is disturbed during demolition or remodeling.  Once asbestos dust gets into the lungs, it can set up a chain of physiological reactions that can lead to mesothelioma 10 to 40 years down the road.

Modern prefabricated houses are no longer constructed of asbestos. Owners of older homes are advised not to disturb or attempt to remove asbestos on their own. Both the U.S. and Great Britain have enacted laws governing the detection and handling of asbestos by abatement professionals.

An international group of researchers have provided recommendations for countries to create a mesothelioma registry. Mesothelioma registries are great tools to monitor the negative effects of asbestos. It can help to identify clusters of asbestos exposure. Registries can also track the impact of asbestos reduction programs. Asbestos Health Risks Asbestos is a naturally occurring mineral that has been found throughout the world. Even though it is toxic, it is used in manufacturing and construction in many countries around the world. Mesothelioma is a cancer that is caused by exposure to asbestos. It grows in the lining of organs like the lungs. Generally, those who develop mesothelioma show no signs of illness for a long time after their first exposure. It … END_OF_DOCUMENT_TOKEN_TO_BE_REPLACED